John Wick and the Toon of Horrors 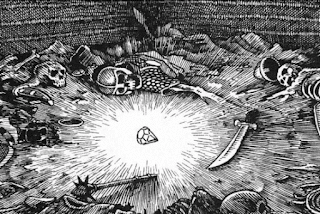 It's all subjective. I remember playing both of them in Junior High and having loads of fun in the Tomb of Horrors and being bored to death by Ravenloft. Quite frankly I'm not a fan of Gary Gygax and when my friends and I played AD&D it was only because there was no better system which we all could agree upon. In a way, AD&D should be lauded for being as fraught with problems as it was. If AD&D had been perfect then so many people (myself included) would not have been inspired to go out and create much better games. We all would have just kept on playing AD&D.

The three things I remember most about Tomb of Horrors are people being teleported naked into various parts of the dungeon which was funny yet strange and probably best forgotten, somebody finding a hidden sapphire that they had absolutely no reason to know about which tipped me off to the fact that my players were reading the module behind my back (not happy about that but at least I didn't throw a hissy fit, Wick), and a TPK when what remained of the party finally encountered the Demi-Lich. Even with the forbidden knowledge of what a Forget spell might do to the demi-lich (as if anyone had a use for the Forget spell back in the AD&D days) they still got toasted. We used the sample characters out of the back of the module, so no one truly cared that we were basically paving the tomb with the bodies of deceased high level characters.

Oh yeah, and there was also a certain green devil mouth hiding a sphere of annihilation. Here's why it wasn't memorable....

Me (Junior Varsity DM Extraordinare): "At the end of the hall you encounter a large gaping green devil mouth with jaws spread wide, just wide enough for one of you to crawl inside."
Wizkid #1: "I shine my light spell into it."
Me: "Um. Nothing. The magical light is swallowed by the impenetrable darkness."
Wizkid #1: "Hmmm, could be a darkness spell. Could be drow hiding on the other side."
Wizkid #2: "I prod into it with my ten-foot pole."
Me: "Well, your ten-foot pole is now a two-foot pole, charred black from where it hit the darkness."
Wiz-kid #1: "Ah, let's not go in there. I check around the mouth for secret doors."


Gee John, now was that so hard?

If anything, the main problem I had with Tomb of Horrors is that it caused within the group a case of ten-foot pole sickness. Ever afterwards somebody would always be out in front tapping everything with a ten-foot pole. The floor, the cieling, the walls, the Evil Viceroy, the Queen of Spiders. It put some serious crawl into our dungeon crawls. I think I finally forebade the use of the ten-foot pole with the promise that I would simply ignore all traps. In truth, it's been so long I can't remember.

Which kinda sucks, because traps are fun. They're fun to think up and plan out (and read about in countless Grimtooth books), but they are very hard to implement, and that is because one thing which was missing from those early days was the ability to depend on the GM to tell you everything you perceive.

AD&D had no perception check. Instead you had the thief and the hairfoot would go into a room, check for traps and be done with it. It was an annoyance but a small one. Tomb of Horrors gave us traps that could not be detected and players responded with a barrage of ten-foot poles being tapped about like a blind-man's cane. In a way it was a unconscious admission that the PC's cannot see where they are going because they no longer trust the DM to show them what is there.

Later editions of D&D would "solve" the problem of the ten-foot pole by replacing it with the perception check. Now, instead of tapping everything to see what is there we had players making perception checks out the wazoo. It didn't actually solve anything. It just turned the ten-foot pole tap into something more dream-friendly yet still agonizing to have at the table.

With the game I'm (nigh-endlessly) designing I've settled on the "Save Vs Traps" event. It's more than just a die roll. It's almost a contract. The GM doesn't have to describe everything a player encounters but whenever a trap comes into a game, even the most oblivious of characters should be given a chance to roll the dice and detect the trap before it has a chance to go off. The players do not have to state that they are searching for anything. It is just assumed that their minds are always thinking and their senses always perceiving, and if they know what to look for they will get a bonus on the save roll. If they succeed they notice the trap before it has a chance to spring, fail and it hits them.

Which is not a perfect fix.

I think back to that encounter with the devil mouth in the Tomb of Horrors and in truth, I prefer the way we did it. It would have been a disappointment to have the players simply roll the dice and detect the trap and move on. But. Tomb of Horrors is a special dungeon (hence the module designation), it is one where you should crawl through it, constantly tapping ahead of yourself with a wooden pole, one where you should have a rope tied about your waist and a bunch of people holding onto the other end just in case some some portal decides to suck you into it. Tomb of Horrors should not be taken as precedent for the way the game should be played. Too much of that and you get Steve Jackson's TOON which may seem like a simple cartoon-based RPG but was actually created out of frustration with people thinking too much and doing too little.

Don't let TOON happen to you!

Although actually do because TOON was a riot to play and one of the best games SJ Games ever produced. If I ever find the free time I'd love to rewrite Tomb of Horrors as the Toon of Horrors. Complete with falling anvils and sticks of dynamite. I wonder if John Wick will playtest it with me?