The Kid is Alright! Almost!

As time moves on and memory fades I often find my imagination filling in the cracks with fiction, patching up the holes with things which I swear actually happened yet few of my old friends remember.

Of course, this does not mean they did not actually happen. It could very well be that my old friends are having the same problem, something systemic and probably stemming from the established fact that we all partied a little too hardy back in our early 20's and possibly broke our collective brain pan.

It could also be that at some point everything we remember becomes "fiction inspired by actual events," and this comes natural with age. The fact of the matter is that the older I get the less I trust what I remember of the distant past. If this hasn't happened to you yet - stay tuned - it will. It will.

So no, I did not run into an old gaming buddy recently. Actually I ran across something which for all intensive purposes might actually be a bit more interesting. I ran into myself in the back of module DL 5 Dragons of Mystery which is not an actual adventure but a sourcebook in module form for the Dragonlance series.

I have mixed feelings about the whole Dragonlance thing. I thought it was neat when it first came out but ultimately a bit railroady and hopelessly tarnished by the presence of the Kender. Ewoks without the fur. Smurfs dipped in bleach. Gremlins if they had been boring. The Kender were such an obvious audience pander it could suck the chrome off a fender. A kender fender bender, if you will.

But that's not why I'm bringing it up. Module DL 5 ends with a questionnaire which I did fill out yet never bothered to send in. Most of the questions on it are pretty banal and uninteresting but the last question contains 8 statements where you rate your feelings on the matter by circling a number between 1 and 5. 1 for Strongly Disagree and 5 for Strongly Agree. The module was released in 1984. I must have been thirteen or fourteen at the time so let's see how teen me did and what forty-five year old me thinks of it now.

1.) When I play a role-playing adventure I like for there to be a strong story.
Teen Me: 3. Today Me: 2.
My understanding of story has definitely changed since I was younger. Nowadays I almost cringe when I encounter the word in the world of gaming. Back then I was probably just thinking about being swept up in the grand scheme of things. Note though that teen me did not give it a 4.

2.) One of the most exciting things about the DRAGONLANCE game are the well-defined player characters.
Teen Me: 4. Today Me: 3.
Wait! There's something exciting about Dragonlance? Actually, I remember being impressed by the character art in this module but the characters themselves seemed a bit statistically deficient (ie - retarded), which is surprising considering....

3.) The cover art and graphics are an important part of my decision to buy a module.
Teen Me: 2. Today Me: 4.
Really teen me? Seriously? I remember you buying L1 The Secret of Bone Hill and it was not for the nigh-non-existent story hidden within. The same goes for the back cover of the D3 Vault of the Drow. Admit it, all the babes Larry Elmore drew for Dragonlance were hot!

Oh well, it could be that I was young and we were still being told not to judge a book by its cover or an adventure by its hooters. Today - yeah - the artwork does matter and I can't stand any of it. 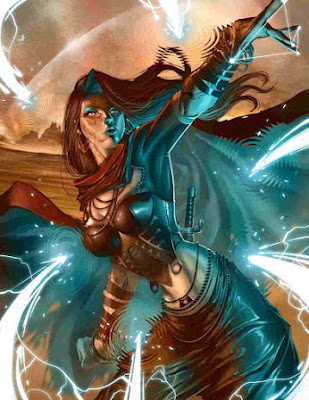 Okay, Unchained Heroes has some pretty awesome artwork in it.

4.) The most important thing in a role-playing game is that there are terrible monsters to fight and great treasures to win.
Teen Me: 2. Today Me: 2.
Wow! We actually agree on something other than Duran Duran.

5.) I would particularly like to see a DRAGONLANCE boardgame covering the entire war.
Teen Me: 1. Today Me: 1.
Whack-a-mole with kender heads might be a different matter.

6.) The quality of accessories - large maps, character cards, tear-out sheets - make a big difference to me in my enjoyment of a role playing adventure.
Teen Me: 3. Today Me: 3.
Yawn. Back then as well as now I always thought of hand-outs as nice but nothing to get excited about. For me they always reminded me that we were playing a game instead of experiencing an adventure. Hand-outs pull me out of that state. I don't game to be impressed by what's being passed around the table.

7.) The fact that DRAGONLANCE products are also a trilogy of fantasy novels increases my enjoyment of the modules.
Teen Me: 4. Today Me: 1.
And in this case I actually like teen me better than today me. I actually do remember being impressed by the sheer magnitude of what TSR was trying to accomplish with Dragonlance. It was bright, fresh, new and had seriously had never been done before. Nowadays everything feels done to death. It's kinda sad that we've entered a world where the release of yet another novel grates on the psyche rather than excites it. And I actually write novels BTW.

8.) When I play/DM a role playing adventure the consistency and detail of the fantasy world is very important to me.
Teen Me: 5.  Today Me: 1.
Whoa! Hold on there teen me! Did you really drop a 5 on that? Whatever happened to making it up as we go along? To not having a solid setting so we can be free to do whatever we wish with it? Okay, that actually did disappoint me. Shame on you teen me. Shame!!!!

Even though I didn't always agree with teen me, I have to admit that I was impressed by my own maturity. For a teenager I was actually a pretty sophisticated kid, treasuring story and involvement over killing monsters and plundering booty. Of course, it should also be said that I did my fare share of monty hauling back in the day. This questionnaire was from near the end of my golden years with RPGs. It could be that I was actually getting tired of all the dungeon crawling by that point.