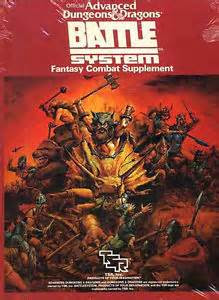 (pictured here - the end of the game)


Sometimes interesting things can happen before the morning coffee. Today it was a small conversation on YouTube (of all places) over the video "The History of D&D: One Fighter at a Time - 1974"

I had written, "Interesting point about the fighting man's destiny is to be a land-owner and eventually commander of a small army. Maybe that's what's missing from the fighter class which makes it seem so weak at higher levels. Everyone talks of the magic-user being overpowered at higher levels. What about the guy with an army at his disposal?"

And Joshua James had replied, "+JD McDonnell That's a good point. Refresh my memory - does the Charisma score of the Fighting Man in White Box affect the number of followers he can garner, or is that from Basic or Advanced?﻿"

And being before my morning coffee I couldn't think straight so I wrote, "+Josh James I really don't recall. I think Charisma effects the number of hirelings one can have in both games. I will say that this approach now makes AD&D's extensive treatment of morale make more sense.
You really have to wonder about their end game. We tend to see D&D and its offspring as being whole packages, but it could be that Gygax and friends had never meant to abandon wargaming and instead create a system which traced characters from their humble beginnings to their ends as the leaders of massive armies.  It could be that D&D was designed as a prequel to a massive fantasy wargaming system which never came to fruition because players were far more interested in the lives of their characters than leading armies."

And then it occurred to me that this was exactly what it was. The option has always been there, and it was always one we chose to ignore because it struck us as boring. I remembered one of my friends receiving the AD&D Battle System for Christmas. It came in a big red box. 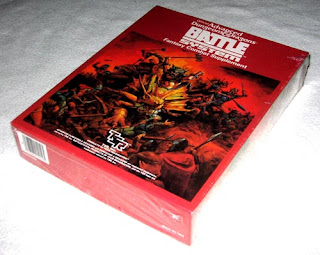 We picked through it and chose to abandon it all in the same afternoon. It felt like a tack-on, like a supplement - which is a terrible word to use when describing any addition to a game, one that wanders far too close to suppository.

At the time we were only faintly familiar with D&D's origins in wargaming. It felt like something that the game had sprung from and chosen to leave behind like a rock star leaving the small town of ones birth. But in the various different rule sets, right from the beginning, it has always been there. At 9th level a fighter MAY establish a castle or freehold and start to attract men-at-arms. Imagine how different the game could have turned out if that one word had been replaced with a SHOULD.

I'm not saying this would have made the game any better. Fourteen year old me honestly found the AD&D Battlesystem to be boring. But. It probably would have cured that general sense of aimlessness one encounters once advancing past the 12th level. It would also have explained why Gygax was so adamant about people playing fighters, the class that most of us derided as being the most boring and useless past the 3rd level. The fighters were the ones most apt to lead armies and the whole schmeal was meant to circle back to the fantasy wargaming which created it.

The whole thing.
D&D is a prequel to a game that never caught on.

Of course, I can't honestly say that we've been playing it wrong because I believe that any game which leads to fun for its players is one that is being played right, but according to design? Yes. Many of us have been playing it wrong. We never made that leap to fantasy wargaming.
Posted by JD McDonnell at 8:01 AM