Why Are You Playing By The Rules?

This blog post was inspired by something said in a vblog over at Shaun Plays White Plume Mountain Notes #10. Spoiler alert!

Shaun is talking about DM-ing a party which has just encountered the vampire at the end of the mud room - the one with the giant discs hanging from chains. The encounter went well enough for the vampire, not so well for the players who were forced to rout.

After the encounter was over, one of Shaun’s players wondered if the vampire’s charm powers should have worked on his character because he was a dwarf and dwarves are short while vampires (of the - Vlad vants to suck your blaad - sort) are typically tall. The DM did mention the need to make eye contact for the power to work and the two were not exactly standing eye to eye.

Around minute 33 in the video, Shaun gets exasperated and says roughly this, “so, remember your players are a lot of the time thinking from - they’re taking in all of these realistic factors - you know I’m coming at it from the rules. They’re coming at it from you know, ‘would this really have happened’ players are always looking for an advantage for their characters, let’s just be honest, so I just kinda thought about it, and there is nothing which says different sized characters cannot look each other in the eye.”

I’m not here to hop on Shaun. I have really enjoyed his adventure coverage, and I do agree with him in that a vampire could easily stoop down to look the dwarf in the eyes. What interests me here is the disconnect between reality and the rules and how Shaun has chosen to handle it. With every intervention of reality he heads to the rule books to see how they say it should be handled. This is something which has irked me from the very beginning, as in from the first game of D&D I ever played. It’s something which has always been there and simply never seems to go away.

Here is the problem as I see it.

Players often don’t know the rules of the games they play and this is a good thing. It doesn’t take too much knowledge of “the way the game is supposed to be played” to turn an ordinary player into a rules lawyer who will suck the life out of a game quicker than any vampire. In my world, the perfect player understands what is on their character sheet and how to make it work within the context of the system. After that they do what many of us old school gamers have been doing since the latter half of the last century - we play by way of what we know of reality to handle the rest. 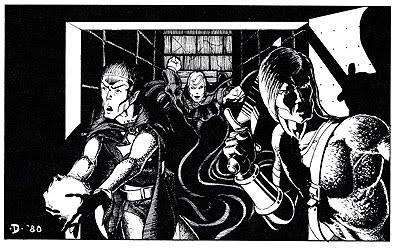 (The Rules Lawyer Rises from his Stack of Books)

Dungeon Masters - it is assumed - do know the rules or at least are willing to stop and look them up when needed. This is great, except that every time a DM does this it is like hitting the pause button on a movie everyone is trying to watch. It wastes times and sparks contention, especially since what the DM often finds is still something which needs to be jury-rigged to fit the situation at hand.

Because of his need to play by the rules, Shaun wasted valuable time and mental energy milling over everything he knew of the game, searching for something which might apply before going with the obvious: the vampire stoops down to look the dwarf in the eyes.

If this were my game, the dwarven player would probably have squeaked out, “I close my eyes and look away!” Which is where I would think - sure, why not?, if it works for a medusa why not a vampire - and say, “alright, give me a dex check to see if you can do it in time, and realize that you are now fighting blindly.”

The dwarven player, knowing a to-hit penalty is hot on his heels would then say, “um, but isn’t this corridor super narrow? If no one can get past me to help fight him, how could I miss with my attack. I mean, he’s right there in front of me.”

To which I would say, “alright, nix the blind fighting but you’re still going to have to give me a dex check.”

Consider how much time it would take to go through the books and find justification for every little needling thing mentioned in my expansion on this encounter. It could easily turn a few seconds into an hour without returning any extra value to the game.

So, why do we play by the rules?

Consistency? Fair play? Time honored tradition? Learned reflex action? Bragging Rights? Is it because we are afraid that if we make it through White Plume Mountain without playing Rules As Written people will accuse us of cheating?

If you are playing - reality beats rules - you are still playing by way of some very serious rules, aka all that we know of reality. If anything, playing this way more than validates your claim to conquest than does someone who finagles their way to victory through loopholes and oversites haphazardly printed in the rule books.

Yes Gerry, I am talking about the Dust of Sneezing and Choking.

I have not forgotten.

We play by the rules in the books because many of us, especially the old school guys, are instinctively tuned to treat this kind of play as a sport. Yes, it has been written over and over that there are no winners or losers in role playing games. Which, of course, does nothing to explain why good old fashioned AD&D was fraught with competitive modules and modules with tournament rules assigning points to actions so at the end of an adventure we could all look back, tally up our numbers, and figure out who the best player was. But whaddyagonna do? 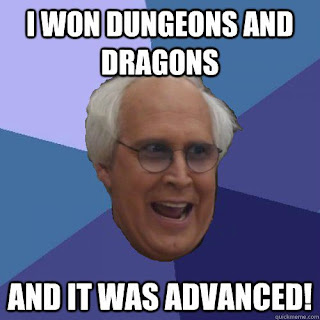 (In truth, I hate the whole obligatory lets pepper the blog post with images only remotely related to the text so it doesn't look like a big wall of wordage, but whaddyagonna do?)

Maybe a case can be made for playing Rules As Written in order to experience a game as it was originally conceived. Maybe the system itself has an underlying pattern of rule interactions which will be disrupted if one of them is left out. But, is it really worth it?

The biggest enemy of the table top role playing game, aside from people being unable to show up, is time suck. White Plume Mountain is one of my all time favorite adventures. I played it after-school in Junior High during the early 80’s. It probably took us four or five sessions to clean the mountain out. Did we play by the rules? I’m sure we thought we did, but with AD&D you never could tell. Shane is currently on his eleventh session and his players haven't even gotten to the crab bubble yet. Knowing who we were at twelve and thirteen years old, if we had played that closely to the rules and taken that much time to get through the mountain, I fear we would have died of boredom before it was over.

And that is not the way to win these kinds of games.
Posted by JD McDonnell at 10:45 PM