Why Do I Care About 3-Hole Punches? 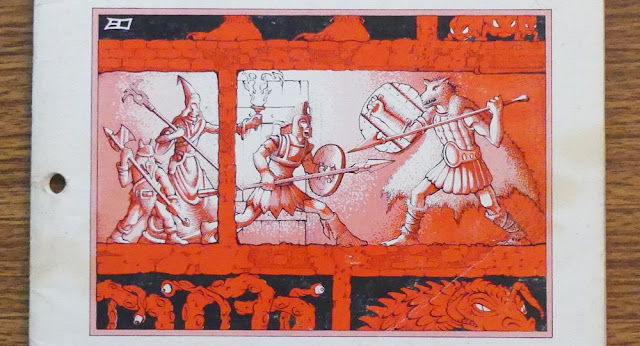 I wouldn’t realize this until a few decades after the fact but yeah - back in the day - my friends and I made the same mistake that everybody seems to have made with the D&D boxed sets, specifically B/X D&D. We assumed that “Basic” was code for “Baby” and “Advanced” was code for “Adult.” And by being in Junior High, we weren’t interested in playing anything that had been made for us. We wanted the real deal! The true unfiltered raw reality of tabletop fantasy! We wanted to play the adult version of our favorite game and had little tolerance for anyone interested in Baby D&D. 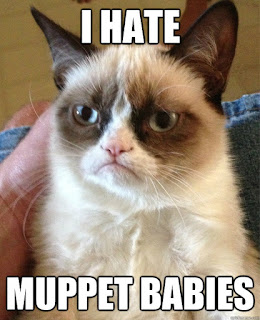 (we weren't too keen on muppet babies either)

Being this way we totally missed the point that B/X D&D was an improvement of AD&D, a filtration of it, a purification of it. It only seemed natural that the best version of the game should be the one bound up in hard covers. Books were special. A hard bound book was one you would be proud to display in a bookcase. Its presence in your home marked you as a fine upstanding citizen, an unpretentious intellectual, a pillar of the community.

Lurid titles sold on dime store racks, destined to end up in a basket beside the toilet before finding their true destiny in some sea-gull infested landfill. Nothing good ever comes wrapped in paper.

And so, many of us came to the hobby through our B/X boxed sets, fell in love with the game and “moved up” to playing AD&D just as quickly as we could afford to. In so doing, we not only missed out on a better version of the game but we also missed something else, something a bit more sublime that no one ever seems to mention. Something which would not work with a hardcover. 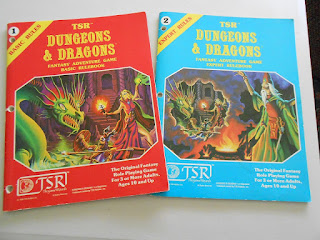 The B/X books had been drilled with a 3 hole punch and designed so you could take them apart and keep them in a binder. As it says on page B3, at the front of the basic rulebook…

“Each rule booklet is drilled with holes, so that if desired, the pages may be cut apart and rearranged in a ring binder. To cut the pages apart either scissors or a razor knife and a ruler may be used. Whenever possible, the other rule booklets will be divided into the same eight parts to make them easy to combine into one larger set of rules. Every page of the D&D BASIC rules are numbered B#, and each page also lists the section it is from.”


Sure enough, each page tells you what section it belongs to, and this was carried over into the Expert manual. As well as a caveat that T$R is not responsible for you damaging your own books by following their advice. As a kid, I noticed the three hole punches. I even went on to massacre many of my other gaming books by trying to punch holes in them, sometimes rather messily. 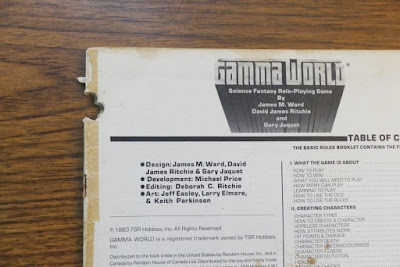 But somehow I missed the part about taking the books apart or why anyone would ever want to. I just popped whole books into a binder and beamed with a genuine lack of clue.

Then I moved onto AD&D.

Assuming my hunches are true, the grand vision wrapped up in these punch holes which we may have missed is the idea that the game should grow with the group that plays it, that people should be home-brewing rules and tailoring what they have towards their own use, without any regard to how people may be playing it across town, out of state, or around the world.

For most people in the early 80’s, games still came in a Parker Brothers box. They were iconic, unmoving, unchanging, oblivious to the desires of the people who played them. The kids who played SORRY! in the 1950’s would play the same exact game as senior citizens many decades later. 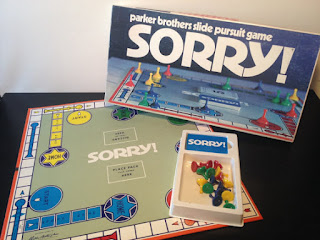 (yes, Sorry! Teaching generations of kids that it's perfectly okay to be total dicks to each other just so long as you apologize afterwards)


D&D was different. It didn’t have a board. It could go anywhere and do anything. B/X D&D took this one step further by creating a rule book which was just as unbound as the rules themselves. If we had bothered to slice apart our rulebooks and added to them as we went, this would have created a tome, a grimoire filled with tabbed separators for magic, monsters, treasure and characters. There would be pages hanging out of it like lunchmeat in a dagwood sandwich. It would grow to become a crazy rag-tag representation of the world, a unique artifact of our imaginations at work held together by glue stick, mucilage and page reinforcement rings. And that would be a good thing.

Think of the way people approach tabletop role playing games. Someone on the B/X design team must have noticed this right off the bat. Beginning players want simple games. Give me a pre-made character, tell me what dice to roll and I will pick up the rest along the way. This is the reason why traditional characters begin at first level and work their way upwards. It’s not because 1st level is the easiest (it isn’t). It 's because first level is the least complicated of all the levels to run. Here is the rub though, as rules are acquired and come to be understood they also lose their compelling nature. People start to wonder what else can be done with the game. How about swimming, spelunking or wilderness survival? How do I raise an army? How do I manage a kingdom? What other creatures are there besides orcs, goblins and skeletons? Being a fighter is boring. What other classes can I play? Races? Multi-classes?

Yet, it is only a percieved complexity brought about by that ever-increasing binder of stuff. Someone new to the group, shown the teetering collection of “rules” would probably run away screaming and rightfully so. But for those who had been there from the start, who slowly waded into the system, picking it up in bits and pieces, it all makes perfect sense. 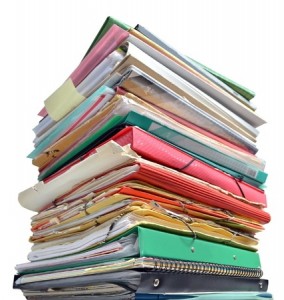 Alhough it doesn't say it anywhere, B/X D&D is a game designed to be added to by its players. In theory, you could even reset the B/X D&D system, to let a new and different game world grow out of it, one very different from the one before. All you needed was another booklet to slice apart and a new binder to keep it all in.

Of course, none of this would have made T$R a dime. It may have even cost them money through production fees and complaints about kids destroying their own books probably didn't sit well either. From what I’ve been able to gather from the internet (and thanks to everyone who responded to my queries) The punching began just before B/X D&D with a number of what you might call support modules for AD&D notably the Rogues Gallery and the Monster & Treasure assortment. My copy of the Rogues Gallery was published in 1980 and it mentions B1.) In Search of the Unknown but doesn’t list B2.) Keep on the Borderlands on the back cover, so I think it’s safe to assume that the Gallery came first. Some copies of Star Frontiers came with three-hole punching but there is nothing in the rules which acknowledges it or recommends taking the book apart (aside from some reference material in the center of the expanded rule book). The last punched product from the golden age seems to be the Dungeon Masters Adventure Log from 1983, which on the first page states...


These sheets have been drilled for use in a three -ringed binder but have not been perforated for removal. Do not tear these pages out. It is intended that all pages remain together to proveide an ongoing history of a campaign.

Yeah, there must have been complaints. After that you have to skip ahead almost a decade to get to the Monsterous Compendium for AD&D 2nd edition. I missed this one. Many claim its pages were weak and the books were prone to falling apart. So, so much for that.

All of which makes me think of the endless sluice flow of gaming material that floods the market on a regular basis. As I write, people have started to show some fatigue with D&D 5e and many are making the leap onto that bright and shiny new thing from Paizo called Starfinder. Just a few months out of the gate and there are at least fifteen different books you can buy for it. Financially, I'm sure it is essential for the companies to produce as much as possible as quickly as possible before the buzz gives out, yet I'm just not sure if it is all that great for the games themselves. There is no wading into it, no personal involvement. Like a trip to Disney world, it's not actually something you helped create. It's just a nice looking place you had some fun at while away on staycation.

Maybe what we need is not another great new game system or a revamping of an old one, but just a better binding system for the one we have been playing. A better way to organize all the stuff that goes into the games we love. One that won't fall apart if you drop it in the hall.

I’ll have to think about that.

Quick Addendum! Tim tells me not to forget that the Rolemaster Standard System books were drilled for holes. Oh. Wait. Just like he's written down there in the comments section. Okay, so, nevermind.
Posted by JD McDonnell at 9:33 AM