There is simply too much randomness in the d20 roll.

My answer is called risk rolling. It’s very simple but you need one six sider you can tell apart from all the others. This is the Sign Die. You always roll it in tandem with another die called the Risk Die which is the amount of risk your character is willing to take in order to succeed.


If the sign die rolls an even number then the risk die becomes a bonus. If odd it's a penalty. 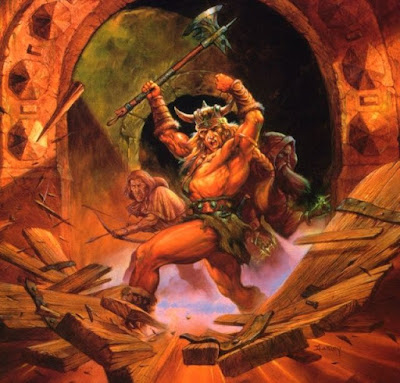 (not exactly Bob but you get the point.)

For combat you use your Strength score for melee attacks or your Dexterity for ranged attacks. Plus other related bonuses except for those normally coming from Str & Dex, of course. Defeat your opponent's ascending armor class and the hit succeeds!

The controlling factor in all of this is the critical fail. Any time you end up with a zero or less that is a critical fail. Bob could have rolled the 1d30 and had an easier time breaking down the door, but if he rolled a -14 or worse it would result in a critical fail. The farther below zero the score goes the more disasterous the fail. Just a few points below zero and Bob might have sprained an ankle. Ten or more points and he would probably break a leg.

For one thing, you are always rolling two dice which to me feels like a more substantial roll. There is something eternal about dice needing to be rolled in pairs. A single die roll just feels strange.

Risk rolling also seems more realistic. I don’t know of any formal explanation for what the d20 roll represents. I guess it is random factors that might come into play. But with risk rolling, the die roll is something specific, something a character has some control over. Risking it all in order to succeed. A certain tension arises as we watch to see what die a player picks as their risk die.

Also risk rolling frees people, players as well as the DM, from having to roll the dice for pointless checks. If you have an Intelligence of 15 there really is no point in rolling the dice to beat something with a DC of 15 or less. You simply succeed, end of story.

Last but not least! It also means there is always a chance you will succeed, however slim. It circumvents the problem of fighting a monster whose AC is too high to hit. Watch out evil Drow overlords, that d30 is coming for you. 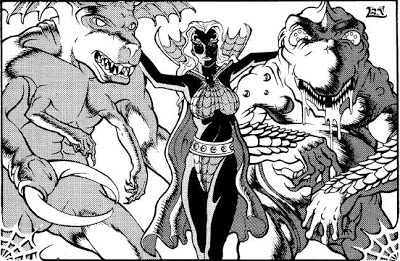 Risk rolling is different and people generally don’t do different. The d20 system has been around for years and is dug in deeper than a tick on a stirge. You don’t have to actually think about what you are doing when rolling a d20. You just roll it and deal with it. Ho-hum.

Risk Rolling also involves subtraction. IMHO people love adding but are not so keen on subtraction, especially when the total drops below zero. It’s a minor annoyance but like a pair of new shoes it may take some getting used to.

Finally, there is no rolling a 20 and auto-succeeding. However, a good substitute might be exploding dice. Whenever the Risk Die rolls the best it can roll as a bonus you may opt to risk roll again. Roll high and it keeps going like a strip of firecrackers. Roll a penalty? That demolishes your lead, and that's why the exploding roll is an option.

Try it some time and tell me what you think!
Posted by JD McDonnell at 12:15 PM