Getting Rid of the Hit Dice

I have found the deep end and taken a flying belly flop into it.

If you don’t know, and you probably don’t, I have been working steadily since last November on my first OSR game. Yes, another one! Because the world just doesn’t have enough of them!!!

Anyways, it’s called the Komo Dosr and it is not an OSR Clone. I have no interest in ditto copying the past. Instead, I have taken it upon myself to fix the past, to tackle all those things I have bitched about over the years (alignments, experience points, vancian magic, rolling 3d6 straight down the line, initiative, etc) and not get rid of them but see if there isn’t a better way of handling them without losing touch with what I like to call the soul of the original game.

So far it has actually gone quite well, up until possibly a few days ago when I decided to get rid of rolling hit dice for class level advancement.

One night, while out walking the dog, I found myself thinking about hit points, specifically what I could remember of Gary Gygax’s explanation of them. As I understand it, hit points do not represent the amount of damage a character can take. It is more like your luck running out. It is actually the loss of that last remaining hit point which injures and kills your character. Every hit point of damage leading up to it has been a blow which should have killed your character but didn’t because your experience in fighting has once again saved your bacon and caused the hit to barely miss. 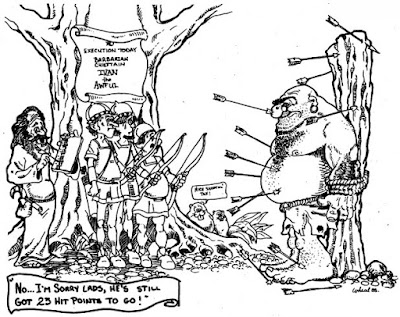 (not that anyone ever thinks of it this way.)

But that is the rationale, and it does need to be there when you consider that D&D is something of a flawed system which doesn’t do a very good job of separating the ability to avoid damage from the ability to endure damage. When a character increases in level they become better at hitting in combat but there is nothing to make them better at avoiding damage other than that dramatic rise in hit points. It does work until you get into a non-combat situation where that bulk of hit points allows you to do ridiculous things like, I don't know, stripping down to your skiivies and wading through lava? 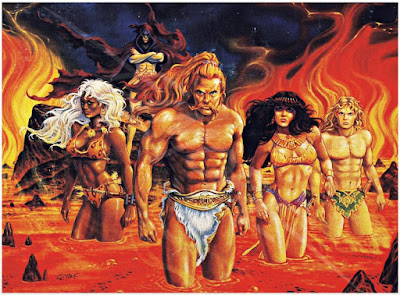 (not that there is anything wrong with that)

In the Komo Dosr, armor is reductive. It nullifies damage and has nothing to do with whether an attack hits or not. Instead, when two combatants clash they roll the dice and whoever produces the greatest number is the one who wins the round and ends up doing damage. This way, your ability to fight works for both offense and defense. If you are the better fighter you could easily end up doing damage round after round to an opponent who can’t seem to place a finger on you.

The system is really cool and it runs really fast. The problem is that if your character has a hill of hit points to hide behind it can also run on forever. Really. Seriously. Forever. So I decided to get rid of the hill of hit points. What you have represents the actual damage your body can take and it comes from your abilities. For most characters this will range between 2 and 20 with an average of 9. 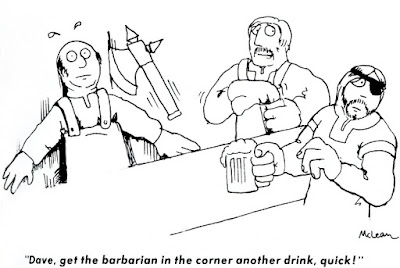 (okay, you try to find something which combines cuisinarts with kielbasa)

The problem is the whole “keeping in touch with the soul of the original game” thing. As someone reflecting back on that golden age of RPG’s I miss the whole ceremony surrounding a level up, where everyone would stop and a ton of attention would hang on one die roll which might just change the course of the next few adventures. I remember once, playing a pirate-themed d20 game, where I rolled a 12 on a d12 for three levels in a row. We were ecstatic! Until I then followed it up by rolling 1’s for the next two levels afterwards. Luck has a funny way of balancing things out.

I say this time and again, dice rolls are more than just random number generation. On some primal level it marks an important event at the table. I think it conjures up deep distant cultural memories of cleromancy that we just don’t often realize that we have. I ran into the same thing with 3d6 down the line. For years, if not decades, I have bad mouthed this method of character generation. As is, it creates crappy oddball characters. Then I sat down to create the first 3d6 down the line character I have made in years... 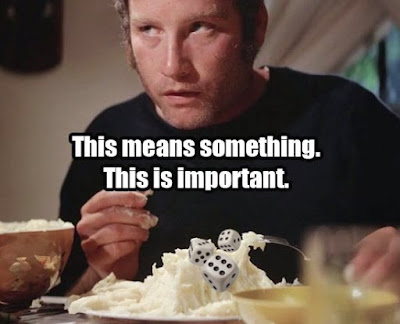 Of course I am! I spend my free time designing table top role playing games. I am a certified loon.

But am I crazy to get rid of the hit point dice?

That is the stickler.
Posted by JD McDonnell at 10:47 AM