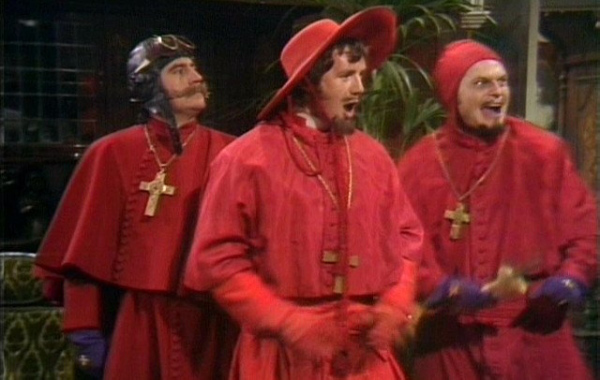 It's been a busy and exhausting week in my neck of the woods, so just a simple post today, the Cardinal Rules. Those five rules which cannot be broken lest we stick you in the comfy chair and prod you with the fluffy pillows.

I like them, but man I wish I could come up with a better name. That Monty Python skit seems to haunt them wherever they may roam....


One of the strange ironies of role playing games is that for something so notorious for having encyclopedia sized sets of rules, you don't actually need to know them to play the game. You just need a base understanding of how the system works and a willingness to look things up when needed. Everything is flexible. Everything is optional. The rules are here to enhance the game rather than restrict it. At base there are only five rules which need to be known and cannot be over-ruled or changed in any way.

These we call the Cardinal Rules.

What Seems Real Is Real

Reality is a big and beautiful thing. To capture all of its glorious detail with every single oddity and conundrum and contradiction perfectly in place would require the building of a system as vast as the universe itself. Such as it is we have a small fast-moving game designed to be played with pencils, paper, dice and the human imagination.

These rules are not reality. What you will find in this book and all the rest are mere guidelines for creating a semblance of the real. Should the rules ever conflict with what you believe to be happening - go with your gut and follow your imagination - what seems real is real.

The Game Master is Always Right

Even when absolutely wrong.

Deciding what flies and what does not can be a tricky situation when dealing with magic, spaceships, death rays and elementals. So no matter how off-center, irrational or glaringly bad a Game Master's decision may be, the Game Master is always right. The Game Master has final say. End of story. End of conflict. End of discussion.

The GM always has a good valid reason for doing what she does, and no she does not need to share it to you. Of course, a GM who does not keep her players happy will not remain a GM for long.

Everyone slips up now and then. We forget we could have done this, that or some other thing. We realize that we should have had a game changing bonus but forgot to add it in.

Can't we go back and do it again?

Sorry, but time only flows forward and you cannot replay something just because it did not go according to design. Roll with it and try to be more vigilant next time.

Only Players at the Table

Nothing is quite so distracting or draining as having someone seated at the table who isn't playing the game. The EFT in Red EFT RPG stands for Easy Fun Tabletop. You don't need a doctorate in game science to play it. If you are seated at the table either find yourself a character and join in or wait out in the hall.

There are no winners or losers in role playing games. This sage-old advice is complete and utter nonsense. These games can be won and they can be lost, but not in the way that you might think.

You will know you are losing when people start making excuses not to show up, when they become bored or disenchanted at the table, when they begin to play with their cellphones rather than their dice.

You will know you are winning when people have no problem showing up on time. When the air crackles with laughter and excitement. When people find themselves wishing the adventure would never end.

That is winning.
Winning is the responsibility of everyone at the table.
We all win or we all lose.


Always play to win!
Posted by JD McDonnell at 1:14 PM