What Not to Be - Did I Miss Somebody? 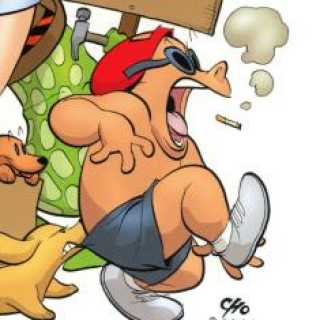 Probably the most interesting thing I worked on this week is the guide on How To Be a Better Player which is filled with basic what to do advice for people who are new to role playing games.
When it came to telling people what not to do I took a different tack and decided to tell people what not to be at the table, encompassing the hobby's bad habits into monsters of a sort.

Does it work? I have no clue. Did I go overboard? Oh, quite possibly. Did I leave anyone out? Well that's for you to tell me.

What Not To Be.

Tabletop role playing games are over forty years old and have a long established history filled with actual characters both malevolent and benign. The following is a guide to the malevolent side of gaming, a bestiary of those who you do not want to be.

The No-Show. The No-Show means well. They say they will be there because they think it makes you happy, but they always seem to find some excuse not to show up and pull out at the last minute.

Even though the Red EFT is designed to handle no-shows, people are not. It's best to plan a few days in advance and stick to those plans as best you can. If you cannot make a game, warn the GM a few days ahead of the actual game.

The Lawyer. The lawyer just doesn't get it. They still think they are playing a game that can be won by beating the GM through a mastery of the rules or a keen understanding of the world at hand. The former is a Rules Lawyer, the latter a Story Lawyer.

Lawyers are actually good people to have around. Too much time can be wasted looking things up, so it's nice to have someone you can turn to, ask a question, and know they will tell you exactly what the books say. However - the game master is always right - and she can cut to the core of the system to have what happens be what she wants to have happen. This also goes for the world itself. She can step outside of a pre-established narrative structure because sometimes space aliens do need to crash land in the middle of Middle Earth.

The Brigadier General. This denizen of the gaming table truly and sincerely wants to group to win, to the point where he or she will not allow anyone to do anything except follow their lead. The Brigadier General leads the group during play and needs to have the last word on all level advancement choices made out of play. This is war after all! Even when it isn't!

It is good to care, but these people need to calm down. It is only a game. It is also a wild, woolly, crazy game where outlandish things often happen. Brigadier Generals often try to tame the game, trimming it down to something they can control and easily understand. What they don't realize is just how boring this makes it for everyone else.

The Flaming Telepath. Omniscient gaming allows you to talk to your friends around the table while the game is going, but to a limited extent. Information passed between characters needs to actually be spoken by those characters. Even if the characters are actually telepathic, they need to voice their telepathic thoughts to get them to work. What a character says is just as important as the actions one makes.

A flaming telepath is an abuser of this privilege. They are constantly talking to other players, discussing strategy to no end, and largely ignoring the characters in the adventure, treating them as mere playing pieces on a board. They are called flaming telepaths because this approach causes character communication to become something akin to telepathy between the characters. While this may sound cool, it is actually a lame way to game.

The Primadonna. Primadonnas are starved for attention. They need to bask in the spotlight even if the light is nothing more than a single incandescent bulb hanging over a kitchen table. There is nothing wrong with stealing the spotlight every once in a while, the primadonna never wants to give it up once they get a hold of it. Primadonnas need to learn to stand down and give other players a chance to shine.

Characters are not dolls. They will not be tarnished if you drag them through a mud puddle. They can actually take a ton of damage and brush it off with a little bit of rest. While it is true that characters do occasionally die there is nothing in the rules saying that death is permanent. The Master of Mary Sue Fu is someone who needs to learn that only good things can come from breaking a character out of its proverbial blister pack.

The Player of Some Other Game. This guy really didn't want to play the Red EFT but ended up doing so because it's what everyone else wanted to play. Begrudgingly he agreed but he still doesn't want to do so and so he has made it his mission to sabotage the game from within, either by forcing it to be more like the game he actually wants to play or by playing it so badly that no one will ever want to play it again.

There really is no hope for this kind of player. Unless you are willing to bend to his will and play what he want to play, but consider yourself warned. It's one thing to have an opinion. It's something else entirely to sabotage other people's fun because they don't agree with it. Brats like this will bend people until they break.

One invisible asset that all games thrive on which everyone needs to bring is enthusiasm. People do not need to be bursting with joy or grinning at everything said and done (stop it Dave, that's really unsettling), but when the enthusiasm to play isn't there you can literally feel the suck coming from that side of the table.

It's best to call a mooch a mooch and hopefully they will realize what they are doing wrong and either clean themselves up or stop showing up. Speaking of clean....

The Funk Pig. This one you will smell coming long before they ever arrive. The only rational explanation for a funk pig is the scientific fact that no one can smell oneself. You may be able to pop your nose under your armpit and get a whiff of how ripe you have become after five days without a shower, but our noses aren't interested in the scents which are always there. Our noses are interested in sounding the fog horn when they detect some calamity waiting off in the mist. A funk pig is just that kind of calamity waiting to happen.

Colognes and perfumes won't hide it. They might even make matters even more malodorous. It's best to always assume the worst. Funky pigs should take a shower before the game begins, put on some clean clothes, and slather those pits in some deodorant.

The Filth Pig. A filth pig is a funk pig who has given up on life. Bodily they don't care how badly they stink because what does it matter anyways? If you get stuck sitting next to one, whether at a game or on a plane, it sucks to be you. Hope you can hold your breath for a couple of hours because the filth pig is never going to change. The filth pig is determined not to change, especially for some lowly pissant like yourself. Their stink is their mark. It establishes the game as well as gaming in general as their territory and you as merely passing through it. The only reason you are there is because the filth pig cannot play these games alone. Otherwise he probably would.

Mentally a filth pig is a leaking waste barrel of toxic sludge. If you ever find yourself stuck at a table with one do realize that nothing good can come of it. Daisies are not going to suddenly sprout from this radioactive pile of sod. It's best to just pick up and leave.


The Dick. At the very bottom of the barrel lies the dick. The dick is not there to play the game but to mess with people. The dick wants to feel good by making you feel miserable. The dick thrives on asserting ones superiority over others and alienating anyone who doesn't agree with them. It has been said a million times before and will probably be said a million times again because human nature does not change easily but.... Don't be a dick.

UPDATE! This section has been removed from the PHB. To read more about it click here.
Posted by JD McDonnell at 8:23 AM