Fear of a Dice Rolling Planet

Summer always brings out the worst in me. Maybe it's the heat, sweating my brain with sweltering paranoia. Or maybe it's just the passing of another birthday, another year down the hatch, another mile closer to that ultimate end. There is something about July which turns me into a creature of the night. No month has more daylight in it and yet no month ever seems as dark as July.

Tonight - 1:32 AM to be exact - I am going to go out on a limb and say something which is crazy-ass insane. Yeah, I know, new territory. And it is this: big media is secretly afraid of board games and role playing games in particular. Yes, this is terrifying to them. 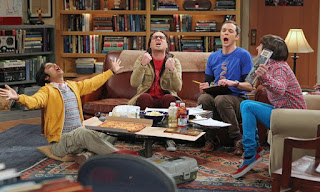 Have you ever wondered why we never seem to get a decent portrayal outside of the realm of low budget indie films? Seriously, there seems to be a connection where the lower the budget goes the better our portrayal is but as that budget climbs and the more widespread the audience becomes the more we end up being portrayed as clowns. Well, here is my pseudo-conspiracy theory.

Our free time is a precious commodity. When we spend it playing board games we are not spending it watching tv or movies or even playing video games - three financial juggernauts which make up the bulk of mass media. They spend millions to create an hour of entertainment. We spend a few bucks on pizza and gas to get across town and gather with our friends. Tabletop RPG's in particular are notorious for gobbling up hours and then days and possibly even years of free time. That is taking money out of the mouths of gluttonous media moguls. It could very well be that we are perceived as a threat and don't even know it.

My sister is a very corporate person. In so far as I know she doesn't read the stories I write or visit the websites I create. There could be an element of sibling rivalry. It could be that she is afraid she will find something she doesn't like. But I think the reason she avoids my work (as well as many many other people) is because it doesn't do her any good at the office. She needs to spend her free time consuming the media which will help her maintain a social edge in the workplace. Today she may be a valuable member of her company, yet no one is irreplaceable so the ability to be someone that other people like to have around is a valuable asset. And so she spends her free time watching Survivor or Modern Family or whatever happens to be popular at any given time.

Yes. My sister was one of the popular girls back in high school, a member of the upper crust among high school cliques.

My point is that she doesn't spend her free time actually entertaining herself. She spends her free time arming herself, stocking up on things she can use to talk to people about, people she knows by name but barely actually knows. This is what most of America uses big media for. It is what solidifies their audience, guarantees that they will continue to draw a crowd, and ultimately causes them to create entertainment which is about as engaging as cold oatmeal.

But what if she did?

What if the people in suits started getting together on weeknights to play medieval adventure games rather than watching it unfold on Game of Thrones?  What if that sliver of the populace which plays RPGs on a regular basis grew into a wedge? It would be a terrible blow to big media.

Obviously, such a thing will never happen. I mean, that would be as bat-shit-crazy as people wandering around the city trying to catch pokemon on their smart phones. But just in case, can it hurt to make the portrayal of anyone doing anything which does not involve the consumption of media seem weird, geeky, awkward or antisocial? And I'm not just talking about RPGs. Go eat your media and notice how often the negative side is shown of anyone entertaining themselves without big media's help. Musicians are glorified but anyone trying to learn to play an instrument is show to suck and ultimately gives up. Unless an artist is an established master, anyone who makes their own art is resoundingly bad at what they do. Actual athletes are applauded by the in-studio audience for making cameo appearances, but anyone trying to hold onto the sports of their youth are depicted as sad, pathetic and hopeless. Do you spend your free time collecting anything (coins, stamps, dolls, trains, games, shrunken heads, dice)? You might as well be a circus freak.

Is it the truth?

Or is it just what they want us to believe.
And for who's benefit?

Yes, there is a reason why it's called programming.
Posted by JD McDonnell at 10:58 PM