Real dice.
Because the bones tell everything....


There is just something visceral, primal, down-right bone through the nose beautiful about rolling dice for a game. Your hands are the last thing to touch the dice before they hit the table so the number that comes up is a test of your soul. It is not the dice but your god-given luck which rolls out before you.

And if that strikes you like a load of hogwash there is still something to be said for the tangibility of the act, the sound dice make on the table. Even those dice roller apps which show the dice in motion and provide a clatter to their landing tend to leave me cold. I could see their value for generating random numbers of odd values, or picking between one of seven glyphs. It might even be nice to create an app which just skips the numbers altogether and goes straight to the result, like a Magic-8-Ball in digital form. 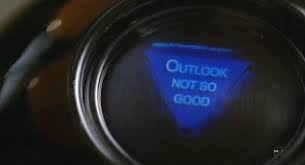 But it's hard to get past the distance which any computer interface puts between you and the game at hand. Maybe if I ever get around to buying a tablet computer I will begin to see things differently.

Diceless gaming? Like Amber? Maybe I could get used to it, but the idea doesn't thrill me. It feels as if it would lend itself to far too much strategizing, far too much time spent guessing what your opponents are capable and how that matches up to what you are capable of - something that dice based RPGs are bad enough about. You would probably need a minute timer to force people to make their move without wasting the whole night on it.

On an interesting side note, as far as I know a computer cannot generate a random number. Instead the machine plucks a number from the time on its internal clock in milliseconds when the request for a random number is made. This means that - you - are the rand seed in the sequence of commands which ultimately generates a random number. When you click your mouse on that random number roller app, you still might as well be Queequeg casting bones on the deck of the Pequod.
Posted by JD McDonnell at 10:23 PM

Email ThisBlogThis!Share to TwitterShare to FacebookShare to Pinterest
Labels: #RPGaDay2016