Of Audiences and Anchovies

Not too long ago I made a cake.

It was a rainy day and we had a box of “Duncan Hines Decadent Strawberry Cheesecake Cupcake Mix” collecting dust in the cupboard. I opened the box to find two bags, the bigger of which was frosting mix. The batter mix was dinky. Not a good sign.

Oh well, I whipped it all up to create a pink slop tasting strangely reminiscent of Froot Loops. Thinking it needed some help, I chopped up some strawberries and mixed them in. It created just enough batter to cover the bottoms of two cake tins. In the oven they went.

While the cake was cooking I turned my attention to the frosting. The white bag? It was basically powdered sugar. Blended with a stick of softened butter and some water it created a substance resembling frosting but one so sickeningly sweet it actually hurt to eat it.

Knowing this would not do, I warmed up a block of cream cheese and blended it in with the juice of a lime. Better. It created something like a key lime frosting, yet it was still missing something. I bopped around the kitchen trying to figure out what. Maple Syrup? Cumin? Oregano? Vanilla Extract? Then I saw it, a tall bottle of a dark brown fluid with a bright golden cephalopod on the label. 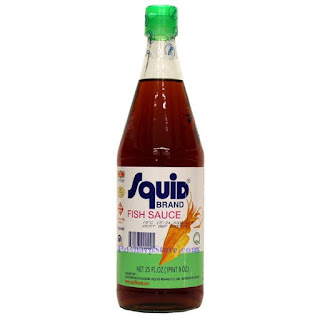 If you don’t know already, Fish Sauce is fermented anchovy juice. It smells like King Kong’s armpit and tastes like the bottom of a dead fish tank, but in small amounts it can provide an amazing sense of depth to anything it is added to.

I tossed in a teaspoon and then another, test tasting both times. The general rule with fish sauce is if you add so much that people can tell it is in there then you’ve added too much. Of course, once you have added too much fish sauce there is no way to get it back out.

Just for good measure I tossed in a third teaspoon and then a small splash.

The frosting is fantastic!!!!!

The cake came out. The frosting went on. What I ended up with was a very low, two layer tart-like strawberry cake which was a hit with everyone who tried a slice. I didn’t tell anyone the secret ingredient. For all they knew Duncan Hines Decadent Cake Mixes were bliss in a box. So....

What does this have to do with anything?

It has to do with the questionable sage-old advice of Know Your Audience. Not once during the making of the cake did I stop to think about who might be eating it. All of the taste judgments were my own and largely done without a thought. The only time I came close to second guessing my embellishments was with the fish sauce. I know my sister hates the stuff. Thanks to a bad encounter with a Fillet-O-Fish circa 1981, she cannot stand anything which comes from the sea. However, she also lives seven states away, and she probably still would have loved it because there was nothing fishy about the frosting. Nothing about the cake even remotely smacked of anchovies. Now if I had opened up a tin and laid the little fishes on top, pizza style, you probably wouldn’t be reading this because I would be locked away in an insane asylum.

When it comes to writing, whether it be for a story or a game, I step into the bubble of that world and separate myself from that big tangled mess of publishing and audiences and sales figures and such. I concentrate on making whatever it is the best I can by way of what I know. I simply cannot think creatively and also think about what my audience may think of it at the same time, not that I even know who my audience is to begin with. Duncan Hines may have millions to blow on focus groups and taste tests and production studies. I do not. And yet, what did all of that polling ultimately produce for them? A chintzy, bland, overly sweet cake mix which needed a whole lot of dressing up before it could even be considered edible. Anyone who buys a box on the basis of what I created is going to be sorely disappointed.

You can never truly know who your audience is. You can fool yourself into thinking that you do, but often all this does is cause a creator to file down the edges on whatever it is they are creating and lose that edge. So my alternative to Know your Audience is

Be your own Audience, but mind the Anchovies.

Being your own audience means that whatever you are creating needs to appeal to your own sensibilities above all others. Any time you find yourself writing something you don’t like but can justify by way of “this is what my audience wants.”

I’m not saying you are wrong, but the world is littered with crappy things which could have been great had they been made by people who actually cared about such things. Look at the Top 40 music of pretty much any decade. Maybe you might get a handful of interesting songs, but most are just tunes made for the masses with about as much integrity as a cake mix.


Now listen to the song Big Balls by AC/DC. In it Bon Scott sounds like demoniac Winnie the Pooh. The rest of the band sounds like they just learned to play their instruments a few weeks ago. The song is not going to win any awards but the band is having so much fun it is hard not to enjoy it. Likewise, AC/DC may not be the best band of all time but the music they made was ultimately what they wanted to hear. They never sang a love ballad. They never cut a disco track. They never tried to rap. But if they had, it probably would have worked because that is what they wanted to do. AC/DC were never slaves to the fashion of the day.

But what about the Anchovies?

We all have anchovies. An anchovy is anything you love for one reason or another which other people might find distasteful. It is when dealing with anchovies that you have to realize that other people exist and that their hurt feelings may come back to haunt you. 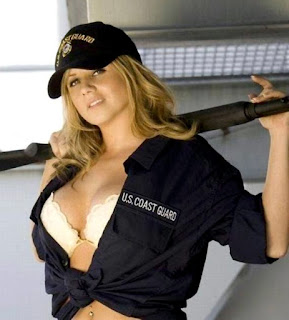 In my novella Supernova, one of the main characters is Lt. Theresa “Tits” O'Shaughnessy. She is an anchovy. She is a blonde bombshell with big breasts and a demeanor that will never let you forget it. If you think I didn’t sweat over the thought of people reading up to her then putting down the book and swearing never to read anything I write ever again - you would be wrong. The world no longer cares for characters like Lt. Theresa "Tits" O'Shaughnessy but I was not about to give her up. She is there because the story needs her to be there. Ultimately, I did finagle the issue to make her presence a bit more palatable, but I don't think I filed off any of her edges. Only the other characters call her Tits, the author always writes O’Shaughnessy, over and over and over again (actually, I think I just wrote OS and then did a find/replace to fix it. Typing the name O’Shaughnessy is a repetitive action injury waiting to happen). She is also one of the smarter characters in the patrol. Anyone who accuses her of being a walking dumb blonde joke is playing off of their own bad attitudes rather than mine. Still. In our current climate where people are burned at the stake for making micro-aggressions against the masses - you have to mind your anchovies.

What actually got me writing today is news out of Sweden about the direction the new owners of the World of Darkness are planning on taking the game in. They want to make it grittier, darker and more realistic (gee - how original - never heard that one before), but what has everyone up in arms is a change to the vampire clan Ventrue. Apparently, they now can only survive by sucking the blood of small children.

On my shelf, I do have a number of World of Darkness game books from the 1990’s. I’ve never actually played the game, I simply like the books. If you want to understand my generation when we were crazy young 20-somethings, you could do a whole lot worse. The point for now is that I do not actually care what happens to Vampire the Masquerade or the Ventrue clan. The idea of monsters feasting on the blood of children is as old as Hansel & Gretel, quite possibly older, but it’s important to remember that in a Vampire game you play the role of the vampire, not the vampire hunter. If your favorite vampire character is of the clan Ventrue - guess what she is going to have for dinner tonight, and tomorrow night? Night after night? For the rest of eternity? If she lasts that long….

Yeah, that is going to rub people the wrong way. By all appearances this is definitely a case of mishandled anchovies. Of course, it could also be nothing more than a misconstrued message. The info was gleaned from a mission statement of sorts and enhanced by good old fashioned internet rage. In so far as I can tell it is not yet a part of the game. Who knows, maybe they will be making some changes in light of it all. Or maybe not.


Be your own Audience, but mind the Anchovies.

Because while we are all far more similar than not, those little difference can go a very long way. And not everyone loves the anchovies….