The Red EFT is the AGAMA, yet again...

What can I say?
The Red EFT failed, and yet it succeeded.

Back in February I finished the digitalverse project (to the typical field full of crickets that all of my web projects tend to encounter, thank you) and barreled head-long into what I had been wanting to work on the whole time, namely finishing up my table top rpg The Red EFT.

In the four months since then I have re-written the entire thing and rebuilt the site I use to manage its resources. And if that doesn’t sound like a ton of work then it’s time for Miracle Ear. The only problem is that in the last few weeks I have come to the realization that what I’ve created is not really the Red EFT.

A Three Hour Tour.
The Red EFT began a little over two years ago with the intention of creating a mini-system which was complete and yet no bigger than 10 pages in length. At the time the game system I was working on was called the AGAMA and it was huge multi-book affair that in no way could be condescended to just ten pages. So I thought creating the Red EFT would be a nice diversion, a lark, a fling, an exercise, a three hour tour….

It was going to be small, really, really, finger-pinchingly small. Characters could be squeezed onto index cards. There would only be three abilities - Mind, Body, Spirit - and then a die roll for your calling. If you were a wizard then you rolled this die for all things wizardly and that covered it. No endless lists of spells or modifiers. All magic was wish magic and you and the GM figured it out on the spot. The game was not supposed to be accurate just fast, really really fast. Like an actual red eft, it would be small cute and quick. Sounds pretty sweet, right? Actually, at 10 pages it turned out to be quite boring, like a game of Gauntlet on a glitchy arcade machine.

Wizard Needs Food, Badly.
The game was too short. The limit was stifling, made it lackluster, colorless, forgettable. I was about ready to ditch the whole project and go back to working on the Agama when I noticed someone on Google+ launching something called the B/X Challenge: write an entire game system in 64 pages or less, like the original Tom Moldvay Basic D&D booklet. I’m not one for internet challenges, but I do love me some B/X D&D, and so I changed my goals. The Red EFT would now be a complete system in 64 pages or less. Sure. No problem. This should be easy!

If anything, the expanded page limit complexified the process even more. Wizards could have spells again, but what spells would those be? How would the new system deal with the tug of war between power and resources? Is encumbrance actually worth it?

For help I turned to the Agama and there the unthinkable happened. Right in the middle of a file save Apache Open Office crashed and took the entire players handbook - the core rulebook - with it.

My head is a bit like a pressure cooker. You can pack pressure up there and it will contain it, but at some point its got to blow and when it does that steam will shoot a mile high.

The Big Rewrite.
And I did just that. Only, somewhere along the way I either forgot about or simply stopped caring about the whole 64 page B/X challenge. I reasoned my way out of the base three abilities. I brought back things like encumbrance because as much as people hate encumbrance it simply makes sense. I did eventually rewrite the players handbook as well as the game masters guide, and the world books and the character books and pretty much everything else I had ever created for the Agama system.

Yeah. Without even realizing it, I had once again totally rewritten my main game system. Something I have been doing and swearing I would stop doing since circa 1992. All that was left was to come up with a new name for it. So far the system has been called….

The Game.
The Theater of the Adsurb.
The ToAd.
Tales of Adventure (versions 1, 2 and 3).
The Model Reality Kit.
The Agama.
The Red EFT.

But I decided not to. Granted, the game is now quite different from what it had been before all of this Red EFT madness began, I like calling it the AGAMA. It’s not an acronym. It’s actually a reference to a small colorful lizard. 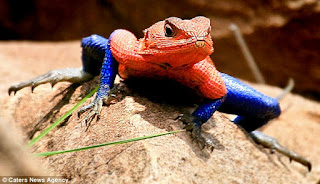 I think I just like the sound of the word. I like the way it rolls off the tongue when used in conversation.

“Hey Dave, what’s happening?”
“Oh, we’re going to play some Agama this weekend. Wanna come?”
“What’s the Agama?”
“That’s the name of the game system. The game itself is something I’ve been building called Wayward Suns. It’s Cowboys vs Ancient Egyptians on a strange alien planet in the Alpha Centauri system. A lot of six-gun shoot-em ups with weird reptilian creatures.”
“Alright. Sounds cool. I’ll be there, what time?”

On top of it all, I am still somewhat taken by the original vision of the Red EFT: the idea of a quick little starter game built around the principles of the Agama that can be given away for free. You know, something for the kids to have fun with :-)

Someday.
Someday, I will buckle down and do it, but for right now I think it’s best to concentrate on finishing the flagship product before creating a scaled down version of it.
Posted by JD McDonnell at 3:57 PM