What's My Beef With Story Games?

The funny thing is that I feel as if I have written this blog post a thousand times over, but the truth is I haven’t done that yet. It is just something I keep thinking about and milling over and over and telling myself I will eventually write but never do.

I cannot say I don’t like Story Games because I have never played one. I simply don’t like the idea of them.

“But Jerry!” You theoretically think to yourself. “How can you say that! You’ve been writing fiction since you were fifteen years old! By now it should be in your blood. You, of all people. You should love story gaming!”

Stories are boring, boring and predictable. This doesn’t necessarily make reality interesting. There wouldn’t be a need for fiction if reality was a non-stop fireworks extravaganza, but most fiction fails to work. We get the premise. We watch the plot line rise and fall. It all culminates with some big conflict at the end and then the credits roll. Wheeee. It’s like a county fair roller coaster ride, but without the vaguely threatening advice to keep your head and arms inside the vehicle at all times. You’ve ridden this ride a thousand times before and will ride it a thousand times again. If it causes you to puke with excitement then you are probably an eight year old.

Ultimately, there are two factors which make a story rise above the rest. The first is delivery, how the author chooses to put it into words. What the creator chooses to show and what they choose to leave out. This a game can give advice on but is probably best left untouched by the rules. I mean, look at Dungeon World. It is actually a pretty interesting system up to the point where it tries to control the way you and your friends converse. The whole Moves business. For me that is where Dungeon World drives off a cliff and makes a flaming plummet into the gully of somewhat creepy control-freak hipsterism.

The second factor is the semblance of a real event. I don’t mean Batman grittiness or the dull pseudo-intellectual posturing of countless Oscar best picture awards. That is cosmetic. That is about using an appearance of reality to dress up a wholly fictional pig (and when is reality ever as dark and gritty as Batman? Or even as dull and gray as any superhero movie these days? Different topic for some other time).

The semblance of a real event is all about getting people to accept what is being portrayed as if it were actually happening. Magic and super-powers are not real but they can be acceptable just so long as everything else continues to treat them as if they were real. Where a game or a story falters is usually where it fails to do this.

It falters because our imagination doesn’t want unreality to succeed. The human imagination may be able to visualize and rationalize some pretty incredible stuff, but ultimately it only cares about reality.


The imagination does not exist to entertain us.

It exists to let you and I see through real-life problems before they occur and become serious real-life fuck-ups. Using the imagination to think of the unthinkable registers as fun because ultimately this is the exercise of a time-tested survival mechanism. If we happen to dress it up in unicorns and rainbows - fine - just so long as the imagination gets to entertain itself by treating the proposed situation as a real life occurrence, then it will pat us on the head and reward us with that sweet sweet sense of fun.

The game that has me writing this rainy dull morning is a little story-telling game currently being kickstarted called High Plains Samurai. Since I am about to kick it in the proverbial nuts I’ll have to include a link to it and of course donate to it. Maybe you should to. It’s actually a pretty interesting concept - Samurai, Gangsters, Gunslingers and Barbarians in a Steam-Punk Post-Apocalyptic future. 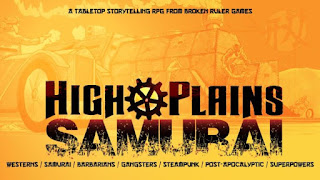 The beef I have with HPS lies in the ScreenPlay engine where, to borrow directly from the kickstarter itself….

“Players take on the role of Writers working with the Director to draft complete stories of action, suspense, horror, and survival. Through their lead characters, Writers actively drive the story and create epic action sequences as the central storytellers; the Director reacts to their descriptions while simultaneously challenging their characters along the way. For every description moving the story forward, another player will deliver its outcome to push it further, react to events, and embellish details with camera angles, special effects, even a character's demise.”

Granted this doesn’t stray too far from the traditional tabletop RPG setup of Game Master and Player Characters but it does change the intention of the game itself. You are no longer playing What If, unless of course the what if premise is “what if we were writers and directors making a b-movie in Hollywood?” but without the whole matter of dealing with an out of control cocaine addiction, a six-figure divorce, and a screaming inferiority complex.

HPS promises high-octane, wire-fu action, which makes me think of the tree-top fight from Crouching Tiger, Hidden Dragon or the Jedi fight scenes from the Star Wars Prequels. They are impressive feats of film work but ultimately they ring hollow because you know we are only seeing them because some team of writers and directors checked the progress of the film and decided that at that point an eye candy filled fight scene was needed to keep things interesting.

It is just hard to get engrossed when you know all that is going on, when the outcome has already been decided in advance because one character is the hero of the movie and the others are not.

To be engrossed we need to think of all that is happening as if it were actually happening. We care about the characters because they are relatable and their survival is not guaranteed. We need to know what they are capable of and why the characters choose to ignore or capitalize on those capabilities.

And it all needs to make sense.


THE MAKING OF JAWS

A few days ago I rewatched for the n-teenth time the 1974 Spielberg classic JAWS. It’s become a start of summer tradition around here. JAWS is not the perfect movie but god knows it does come close. The DVD also includes a bonus feature called “The Making of JAWS” which I had never seen before, so this was a first for me.

JAWS was a movie plagued by problems from beginning to end. Everything gave Spielberg grief - the weather, the actors guild, the people of Martha’s Vineyards, the robotic shark - to the point where the movie almost did not get made. Interestingly enough, in watching the Making of JAWS I couldn’t help but feel that if everything had gone according to plan they would not have made nearly as good a movie. You would have seen much more of the shark, far more scenes of people being eaten, and far fewer scenes of the little things which make it such an interesting film - but are really just there to eat up time left open by the malfunctioning shark: Chief Brody mugging it up with his son, the shark hunters hamming it up below the deck of the Orca, the mayor talking about how much he cares for the people of Amity Island while blindly trotting through the middle of a high school marching band - these sort of things are normally left on the cutting room floor because they do not fit the bill of “what people come to see.” With us, their presence in the movie registers as out of place. This increases the sense of uncertainty which in turn increases the dramatic tension which we the viewers feel humming in our bones as we sit there and wonder if it will all end in the way that we expect it will end.

JAWS does end in the way you expect it to end, 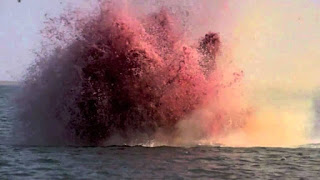 But it’s not the ending that makes JAWS great. It is that sense of uncertainty.

They're definitely going to need a bigger boat.

The same goes for games. If you don’t have the threat of a possible TPK looming under the dark waters of your game like a great white shark with cold dead eyes and the iron scent of blood in its snout, then it won’t carry much weight. Who knows? Maybe High Plains Samurai has this. It does entail dice rolling after all. I guess there is only one way to find out….

Here's the Kickstarter link.
Posted by JD McDonnell at 9:45 AM