So, this past week I got in a conversation online about whether or not RPGs could exist before the 1970’s. I mentioned a fragment of writing by RE Howard which appears to have some of his characters sitting around a parlor and playing one. Thaddeus Moore wanted to know where it could be found so here it is. It comes from the back pages of Kull Vol.2 by Baen Books. 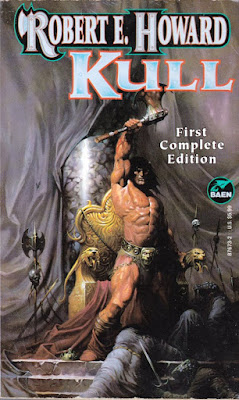 But I thought I would do Thaddeus one better by scanning in the pages, so here they are. The parts which I found most interesting at least. The rest of the fragment is just two more pages describing the history and appearance of Howard’s characters. 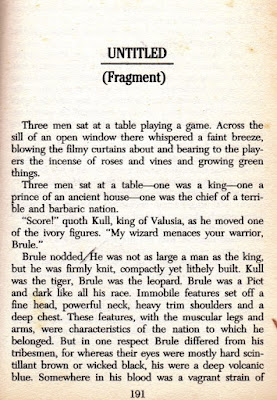 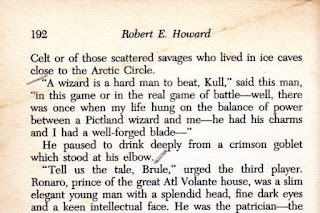 Yes, it is not much to go on, but there are some interesting points to be found here. Kull shouts out Score! So the imaginary game does have a win condition and is being played competitively. He moves an ivory figure which insinuates a game of fantasy chess. He tells Brule “my wizard menaces your warrior” which could be taken as “my bishop moves to where it could strike your knight” but why would you tell your opponent this? And when was the last time you played chess with three people? Ronaro doesn’t make a move in the game, but he is sitting at the table and described as one of its players.

Probably the most interesting bit is what Brule says on page 192. “A wizard is a hard man to beat, Kull, in this game or in the real game of battle-” Granted it was probably meant to be nothing more than a segue to Brule telling a story, but it does imply that you do not simply defeat a character in this game by knocking them over like a chess piece. That there might be some hit points involved, some special powers and the casting of spells.

If only Howard had written something about rolling dice!

My point is that the dream of the Fantasy RPG was there. I suspect that RE Howard while writing this bit of text wasn’t just thinking about a possible story but also about how cool it would be to have a game where he and his friends could play the characters in his fiction. Maybe that’s why this fragment never went on to become a full fledged story. When you’re writing, it’s easy to get derailed by a good idea.

The 1930’s would have been perfect for the advent of the TTRPG. Print technology was at its prime with only film and radio to compete with. Polyhedral dice did not exist but six-sided dice were plentiful. And of course, there was the depression. There would have been large numbers of people in desperate need of a cheap escape and stuck with more than enough time to play in a seemingly endless campaign. It’s easy to imagine Weird Tales printing a single issue containing nothing but the rules for an RPG written by its authors - providing anyone ever thought to do so.

And that’s the clincher.

Ultimately, my answer to it all was -No- at least here in the USA the TTRPG could not have existed before the 1970’s, the reason being that you need the tumultous revolutionary thinking of the 1960’s to open people’s minds to where the playing this game - which comes in a box but has no board, a game with no winning condition, a game where you play with your friends rather than against them, a game where you and your friends pretend to be elves - is possible. Even in Howard’s imagination he cannot totally escape the idea of games which have an end and a winner and a competitive nature. It’s easy to forget just how rigid people's mindsets were in the 40’s and 50’s and presumably every decade leading up to the 1960's. In the 1950’s, when Elvis was caught shaking his hips on the Ed Sullivan show the world exploded with moral outrage. This is not a world which is ready for Dungeons & Dragons.

Even back in the 1930’s, if I remember right, pulp magazines were treated like pornography. They were kept under the counter at the local drug store, meaning you had to ask for them by name and endure the disapproving stink eye of whatever American Gothic caricature happened to be working the counter that day. So even if Weird Tales had produced an RPG it would have never encountered the massive success which D&D did in the late 70’s and early 80’s. It would have been frowned upon into oblivion. Just like the weird pulp fiction of Howard’s time, it would have become a niche hobby enjoyed by scattered bunches of basement dwelling weirdos. 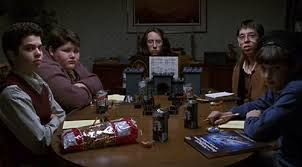 (Not that there is anything wrong with that.)

In my comment to the post I also joked that you had to be stoned to enjoy a game like D&D. I did not mean this literally. Marijuana & Dungeons & Dragons do not mix. Well. But there is no overlooking the mind-expanding influence of psychedelic drugs on the culture of the 60’s and 70’s. Even if you never went near the stuff, the counter-culture did and they in turn took over the culture itself, opening people up to at least contemplating ideas which just a few years earlier would have been strictly taboo. While it is easy to think of D&D as a cultural vanguard, the game was more of a cultural coat-tail rider. The reason there are oriental monks in AD&D is thanks to Bruce Lee and the popularity of Kung-Fu movies. The mess that was psionics? That probably came from doing bong hits while watching In Search Of (well, how would you explain AD&D Psionics?). Gygax and friends were basically cultural trash compactors. If it was popular, if people mentioned a desire to have it in their game, they found a ways to squeeze it in there.

So if Vietnam had not been a thing for the hippies to rebel against. And if those rebellious hippies had not latched onto fantasy fiction - Tolkein in particular - as a metaphor for what they were trying to do by defying the establishment and living differently. And if bands like Led Zeppelin had never latched onto what their fans were reading and helped revive Tolkein in the popular imagination?

Well, maybe the TTRPG would still come into existence, but it would not be the same kind of game that we play today. It is doubtful that it would have ever been anything more than a small-skirmish version of a larger wargame. Think Call of Duty sans the computer. It would have been a game for the cadets at West Point to play and study as a battle simulator. And for those of us who stumbled into TTTRPGs because of D&D’s early success? There’s no telling what we would have done with all that free time, but we probably would not have enjoyed it nearly as much.
Posted by JD McDonnell at 8:03 AM