GO BUY THIS GAME. For no better reason than to keep Hankerin cranking out the beautiful craziness which is Runehammer games. Junk’d costs about as much as a gallon of gas and will probably give you far better mileage than whatever car crash game you may to be playing right now.

For the record, I have not played Junk’d. All I’ve done is read the rules and dreamt about it a bit. But I have seen enough to feel confident in saying that the writing is excellent. The art is spot on. The game is fun. And I absolutely love the idea behind the Ghostriders. It gives those players who are no longer in the race something to do besides sit around and wait to see who wins it. It also goes to show just how well thought out the game actually is.

Junk’d easily circumvents one of the biggest problems with tabletop driving games which is the matter of accurately portraying vehicles designed to cover long distances in a short stint of time.

And that’s a good thing.

Instead it goes for the abstract, the engine power of your car does matter but it works in fits and spurts, only periodically moving you forward. Twelve steps forward and that’s a battle. Unlike Car Wars, you don’t need a free ping pong table to play on. Using micro machines you might even be able to play Junk’d in the back seat of an actual car. Think about that for your next road trip.

(Hey you kids! Keep it down back there!
Don't make me pull over!)

Vehicle design is super simple. It can be done in under a minute. And yet it still has a feeling of importance. The vehicle you drive will change the way you play the game. Maybe Junk’d doesn’t have enough meat on the bone to satiate any serious gearhead urgings, but at least you won't spend a whole evening beating a calculator to death to make one car.

When I said the writing was excellent, I meant the creative side. The instructional side is a bit iffy and even after reading it three or four times I’m still not completely sure I understand how the game is played. It is a turn based game and on each turn you make one of five dice pool rolls.

Engine - for moving ahead and powering to the end of the stretch.

Tires - for swerving side to side, changing lanes.

Ram - for slamming sideways into a vehicle beside you.

Guns - for taking a pot shot at someone directly in front of you.

Armor - for surviving being hit by gun fire or a collision. 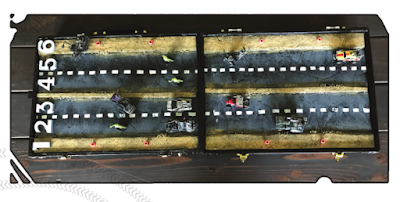 Actually, you choose one of the first four. I don’t think there is ever a reason you would voluntarily roll your Armor. With engine you move straight ahead as many segments as the best number rolled. With Tires, Ram and Guns it is good to understand that there are six lanes on the stretch and each are numbered. With Tires you may move into any lane you rolled the number of. With Ram you do the same but only if there is a vehicle there for you to hit (where that vehicle goes after you slam it is not so clear, maybe you ride on top of it?). With Guns you can shoot someone directly ahead of you, but only if you manage to roll that lane number.

Now, Tires I like, even if it leaves you in the awkward position of being unable to switch into the next lane over but able to careen all the way across the board. Yes, your steering wheel is made of silly putty.

Guns is alright, but I think you should be able to target anyone on the stretch of road just as long as you are able to roll the number of the lane they are in. Having to move into a lane and roll that lane’s number feels like a bit much.

Ram is the only roll that doesn’t sit well with me. Sure, it is basically a sideways version of the Guns roll, but it is a little too abstract. If anything, I think Ram should be like Armor, a defensive roll you need to roll a 6 on whenever you collide with something. Hit a wreckage, roll a 6 and you burst through it in a cloud of bent flying steel. Engine forward or tires sideways into another vehicle and both drivers need to make a Ram roll. Whoever rolls the lesser number gets junk’d (a tie junks you both!). Beat the other vehicle’s ram roll and that vehicle also get pushed backwards a segment to make room for you. 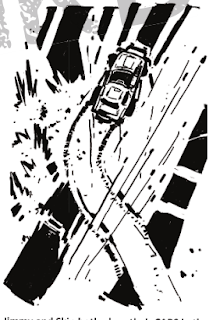 But that’s just me.

When it comes to games I’m like the Mikey the Life cereal kid. I’ll waste anyone who tries to come between me and my milk-soggy bowl of corn puffs.

On the whole. Junk’d is an excellent little car battle game that should hold the world over until another Mad Max movie gets made. It does not accurately simulate anything, other than the abject insanity of a Fury Road drag race.

And when the hell is another Mad Max movie coming out! Star Wars films keep dropping from the sky like so many malfunctioning satellites, and yet Fury Road 2? Come on Mr. Miller, hit the nitro already.

Dammit, where are my dice!
Posted by JD McDonnell at 9:24 AM