WOO-HOO! PAAAAAAAAAAAAAARRRRRRRRRRRRTTTTTY!!!!!!!
IT DOESN’T GET MUCH MORE EXCITING THAN THIS!

In fact, most paint dries with greater excitement than the matter of number resolution, but it’s still something I tend to think about far more than I should. And that is pretty much what I write about around here.

Number Resolution. It’s like the screen you’re looking at. The greater the number of pixels the computer manufacturer packs into the display the finer a picture you will recieve, and yet the more work it demands of the computer processor to project it up there. With tabletop RPGs - for me at least - number resolution does the same thing. It comes in three flavors: High, Medium and Low Resolution. 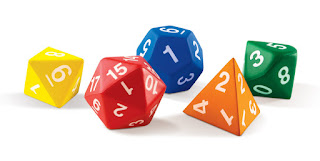 HIGH RESOLUTION
1d100. This is the truest view of what is going on with most core mechanics. You have a number range from 0 to 100 with 50 being the universal average. It’s high resolution because it allows you to add something as small as a +1 for an ultrafine adjustment of character chances. It’s also the most demanding. Quick what’s 87 - 36?

That took you a little while now didn’t it? And here is the problem with high resolution, unless you are of a mind-set which easily swims through seas of numbers the game is going to grow tedious and exhausting for most people. The game needs to truly be special to justify the math. Of course, you could resort to using just 5 point blocks, but if you’re going to do that you might as well use…. 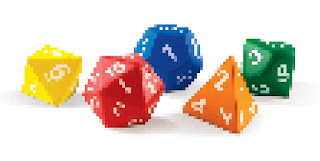 That was a whole lot easier. This is the same problem from above changed from high to medium resolution and rounded down (because we always round down). Some of the fine granularity has been traded in favor of greater speed and die rolling possibilities. And yet it still has enough variance to let things like the difference between a sword and an axe matter to its players. 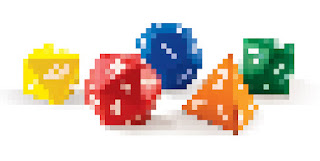 Note that the answer is half of what it was in medium resolution and a fifth of what it was in high resolution. Unfortunately the game is getting pretty chunky at this point. A +1 matters immensely, but because of this you cannot simply throw them around without good cause which will cause a loss of distinction.

We could go lower, and there are games out there which have done so. Rolling just 1d4 or flipping a coin to determine an outcome, but for me this loses the whole point of replicating reality and the influences that things have upon each other.

SO WHICH TO USE?
That is the hard part. It’s actually something I’ve been wrestling with right now. As a game designer I love the idea of high resolution. I’d love to create a game where you could actually build your own suit of armor with greaves (+3), different layers of mail (+2 +2 +2), full helmet (+8) or possibly just an open faced helmet (+4) and it all adds up to your armor class. But. That takes a hell of a lot of time to design let alone play and most players are fine with picking a suit - chainmail, platemail, scalemail, etc. - and moving on. There is also the matter of what people are expecting from the game itself. I think of TOON from SJGames. 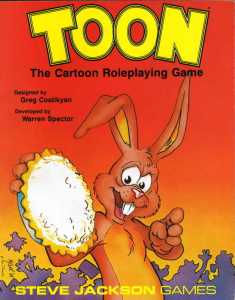 (Because I always think of TOON, the screensaver of my mind)

TOON is a great low resolution system. You could convert the number system to a high resolution 1d100 experience but it would slow down the action to the point where you might feel like an animator drawing an actual cartoon frame by frame. You would probably have to pay people to play the game at that point. Even as a medium resolution game TOON could still be overbearing. TOON is good for one night single-shot events. Nobody turns to it looking for the long evolved campaigns that D&D provides. TOON campaigns are measured in hours, not days. TOON runs on 2d6 and speaking as someone who has played many games of it, I’d say it does so perfectly.

CHOOSING THE RIGHT DICE
Most games don’t talk about why they choose to use the dice that they do. I’ve heard a lot of people defend the use of d6’s by saying “they’re common dice, they can be found anywhere, most people have some laying around the house and they will be more likely play my game if I use them!”

But think about this for a moment. Dice of different shapes and sizes are more prevalent now than ever before, and the sad fact of the matter is that most people will gravitate towards the major label games and possibly spend years there before they ever bother with the minor label games that (presumably) you and I produce. This means our players will probably already have a big bag of dice at their disposal.

There is something to be said about the tactile affair of rolling dice. The d6 does a very nice job coming to a stop after a roll, which is probably why the d30 never caught on. It also has a home-spun feel to it, which can work for or against the system at hand.

Then there is the matter of the number of dice involved in the roll. I’m not a big fan of the single die roll. I think it feels strangely weak and insubstantial. Meanwhile the thunder-like clatter of seven to ten dice hitting the table all at once may sound impressive but it is also kinda of annoying trying to pick through the results. And yes, I have not even begun to address the matter of dice pool games, but hasn’t this blog post gone on long enough?

JUST END IT ALREADY!
So ultimately, between the three resolutions I think high resolution is the most ambitious but also the most risky as far as the time it takes to design the game and people’s reluctance to play it. Maybe for hard sci-fi games which can play off the technical appeal of large numbers.

Low resolution is just the opposite. It can come together quite quickly an be fun to play, but like an 8-bit video game from the 1980’s people may be willing to play it once but I can't imagine them playing it too many times. People are going to want such games to be small and limiting oneself in such a way is not always easy.

Medium resolution? Well, there’s a reason it is the industry standard and it’s not just because it was there first. Medium resolution does a good job balancing simulation with playability. But. There are so many medium res games out there that you need to offer something truly special to separate from the pack.

So what do you think about all of this? Why does your game use the die roll that it does? Am I spot on or totally off my rocker?

Oh, and just because I can. One of my favorite bits from Ren & Stimpy. Remember kids, play with dice, not electricity!