This is from Dimensions ‘84 my Junior High School yearbook. I am the kid in the center shuffling a bunch of papers and notably - not - looking as if the entire party had just been TPK’d. Chris, the tall kid standing next to me, may have been the DM or it may have been me. We all took turns DM-ing different adventures. Honestly, I don’t remember the photograph even being taken. It was definitely staged though. One of us is probably standing so we didn’t have to sit with our back to the camera. We did push desks together to play on, but the surface usually wasn’t so cluttered. We probably did this for the photo because - D&D - even back then it did not seem right without wobbly towers of books and papers sliding around the table.

I also have no recollection of being voted “co-president” of the group. That was complete news to me when the yearbook came out. Maybe Joe Spoleti (not pictured) snuck it in there to get access to the dodgeball launch codes, or whatever it is that the co-presidents of after-school groups actually do. It says we were a club but we were really more of a group. Part of being able to use the school was an open door policy where anyone could join. There were no strange initiation rites. If you showed up we would set you up with a character and try to squeeze you into the game as best we could. Girls were invited but none dared to show, so it did remain something of a sausage fest. 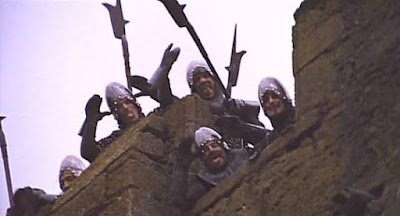 (and maybe that was all for the better)

Every Tuesday and Thursday (I’m pretty sure) we would meet after school in the social studies room and play for a couple of hours. Mrs. Dewsnap sat quietly at her desk in the front of the room correcting papers, undoubtedly listening in to make sure things didn’t get too out of hand. To her credit, she never intervened on any of our games, and to our credit things we never got so out of hand that she had to. We were good kids. We even had something of an unwritten policy where you never killed anything unless they had done something to deserve it, especially humanoids. In a strange way, I guess it’s kind of fitting that it all took place in the social studies room. Now if only actual human history could be so kind.

I moved to Red Hook in the summer of ‘82 and the Adventurers Club had already formed by then. I really had no idea what D&D was and had only heard of the game through news coverage of it being burned in effigy, but I needed to make new friends so why not? On the very first day of school I was invited to join. I became the party cleric (of course) and it was love at first die roll. I turned some skeletons with my holy symbol and never looked back. I don’t know what the Adventurers Club was like before 82, but I’m pretty sure it peaked around 83/84. Not many people had shown up for this photograph but I do recall games where we had like twelve kids all trying to play at once and getting absolutely nowhere. The idea that there could be a maximum number of players in a game hadn’t gotten around to us yet.

By 84/85 the group was on the wane and by the spring of 85 it was over. So my experience with the golden age of RPG’s perfectly fit into the stretch of Junior High and maybe that was the problem. We were eager to move into High School and become teenagers - cool in every way - D&D had not yet developed the stigmatism of being a nerdy pastime (that was the chess club, three rooms down the hall). Two of the guys in this photo were on the football team. In fact, we often had jocks playing with us if their favorite sport was out of season. Still, the things you do in Junior High just don’t fly when you get to the hallowed halls of High School, where the rule of cool is more autocratic law than mere guideline. 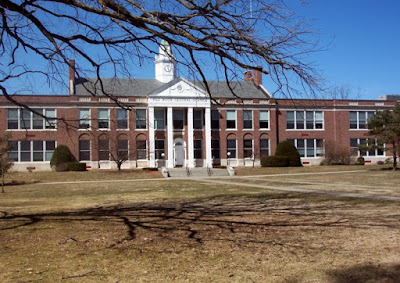 (Come to think of it, the Red Hook Junior High
really does look a bit like a castle.)

Another problem may have lain in the games themselves. Specifically D&D, and that specious notion that when your character dies you have to start over at 1st level. No one wants to start over at first level when everyone else is 7th, 8th or 9th. Especially when most of your XP comes from creatures killed, and the way we played had all of the XP going to whoever delivered the killing blow. That was the way we played and we followed those rules a little too religiously. On the internet there is this notion going around that the Rules Lawyer did not exist until D&D 3.0 -  w  r  o  n  g  - oh so wrong. I think that for as long as there have been rules there have been rules lawyers looking to win on a complication. D&D exploded with content during these years. Between Dragon Magazine and Unearthed Arcana the rules bloat made playing the game nearly impossible. There were way too many instances of people stopping everything to look something up and then squabbling endlessly afterwards over what one thing or another actually meant. The idea of the DM being above the rules was another convention that was not a part of our mindset and our games truly suffered for it.

Far more insidious (more insidious that rule lawyers! Impossible!) I think the Satanic Panic also caught up with us and took its toll. There were a number of kids who truly loved the game but just stopped showing up for reasons they would not discuss. I am Catholic and the family did go to church every Sunday. In fact, I was actually a regular reader of the liturgy. But my parents were college educated and they knew hokum when they heard it. We never had that little talk about the perils of Satan & D&D. If anything, I think my dad got a kick out of the fact that I enjoyed something which in many ways resembled the school board meetings his job forced him to attend. He probably wished his meetings could have been as much fun. Yet, I do remember that at the end of Confirmation we were given a meeting with our priest and allowed to ask him anything off the record. The one question which commanded the whole affair was, “what’s wrong with D&D?”

And it was not asked by me.

I was largely a silent observer. It was brought up and debated by those kids who were in the AC but had mysteriously dropped out. I actually felt bad for Father Coen because they had him pinned to the blackboard with something he honestly knew nothing about. There were actually many reasons to condemn D&D at that point, most notably the idea that you had to kill and steal to get ahead, but the best he could manage was the tired old line of “it involves, witchcraft and demons and magic and things you should not be playing with” which all boils down to “you don’t play the game because my higher-ups are telling me to tell you not to play the game.”

We may have been confirmed that day, but it was an indoctrination into a world where you say what you say to toe the line yet rarely ever say what is on your mind. Welcome to adulthood kids. I suspect the church lost some converts that day and the free thinkers of the world gained a few. Or at least, so I hope.

Last but not least, there was also the rise of the VCR and girls and after-school jobs and cars. And actually a whole bunch of other adultish things to drag us away. As John Cougar Mellancamp sang it best, hold onto sixteen as long as you can ‘cause changes came around real soon to make us women and men.

But for everything that went wrong during this period it was still dramatically outshined by all that we got right. The camaraderie, the friendship, the astounding feats of imagination. Gaming wasn’t pure escapism. It wasn’t any one of us alone, dreamily disappearing into the pages of a novel. When we joined forces on those Tuesday afternoons it felt like we were actually accomplishing something. We took our games seriously - sometimes a little too seriously - but we came out of them feeling bold, noble, mighty, proud. 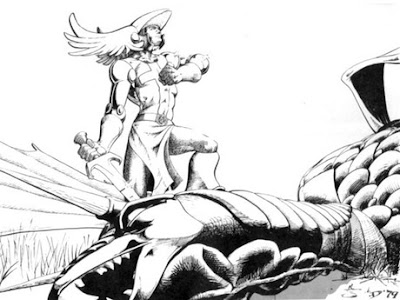 And I wouldn’t trade that for anything.
Posted by JD McDonnell at 2:59 PM