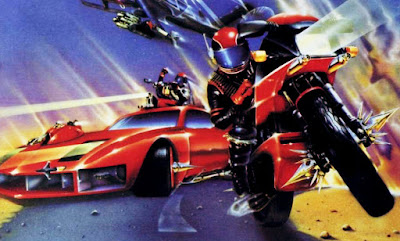 And in not nearly as glorious a light, I think the same could be said about why we played Car Wars back in the 80’s. Or at least why we spent so much time designing cars for it. When you pulled together a Car Wars car you milled through hundreds of equipment options, balancing price, weight and space with your vehicle’s engine power and suspension and chassis limitations. You crunched numbers. Boy did you crunch numbers. I think I once broke a calculator crunching all those numbers. Strangely though, that is what made Car Wars fun.

The downside of Car Wars was that you would eventually have to play Car Wars, a game with slow  screwy rules played on an overly large map that used dinky little cardboard chits which skidded out of control when you breathed on them. The only reason to play Car Wars was to test your vehicle design and take it back to the drawing board after the game destroyed it. If my friends and I had all been born two decades earlier, we all probably would have been gearheads doing the same thing with actual hot rods which we would take out to the desert to drag race American Graffiti style.

Or possibly not. That kind of thing is expensive and we lived nowhere’s near a desert. Like everybody else we probably would have sat around dreaming of such things. Which is why we play games. For the time and money involved, Car Wars is a lot cheaper than the nearest reality.

I just caught this video review of the new Car Wars 6th Edition which is coming out sometime soon.


It’s Easy Guys! Come on, it’s so so Easy. So much easier. And a whole lot easier than it used to be. If I had a dime for every time they called the game easy, I’d be rich and SJGames would be broke.

They realllllllllllllllly want us to believe that the new Car Wars is easy.
The funny thing is that I’m not sure if I believe them.

I can’t say anything for certain because I haven’t seen the rules, but from what I was able to glean, the new game seems more abstract than the original but not necessarily easier. You roll dice with little symbols on them. Like a cash registers at McDonalds they try to use hieroglyphs in place of words wherever they can. I didn’t see anything which resembled a speed or handling track. Maybe this makes it all easier, but the problem with an abstraction is that you cannot use your imagination to reason your way through it. All you can do is roll the dice and take whatever it gives you.

What do you want to eat today? Roll a die….

A 3! Oh, don’t look so sad. A lot of people like the McRib, and it only comes out once a year. Please come again….

I like what they had to say about Funsics vs Physics, but original Car Wars never ran on physics to begin with. It was always a close approximation of what seemed to be real, done to impart a realistic quality more than anything else. Funsics seems to be more about, “we can’t give you reality so we’re just going to give you a load of barbeque sauce and hope you don’t notice what’s missing.” 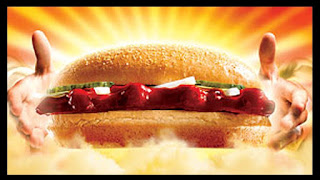 (Contains as much pork as Car Wars contains Physics)

Meanwhile, building a vehicle has been dumbed down to where your vehicle has a number of Build Points (like 16 or 32) and everything you add to it will cost a number of points. No price/weight/space or acceleration calculations. It sounds like something pulled from a video game. It feels like the principal was to zip through vehicle design as quickly as possible, something hearkening back to 5th edition Car Wars which had no vehicle design rules and had reduced the game to a collection of over-priced pamphlets containing pre-made vehicles and rules which if I recall correctly were still not complete enough to let people actually play the game. If there was cash to be grabbed, 5th edition would have existed to do just that and not much else.

Now. I have nothing against simple games that are easy to play and Car Wars - more than any game out there - could use a complete rules overhaul when it comes to the play of the game?

It feels like it is missing the target, that something is being lost.

The entire gaming world seems to be racing towards a ephemeral state where games are designed to be picked up, played once and abandoned. Like getting tube socks in a plastic bag with a ziplock seal, you may actually wear the socks until they hatch holes, but the company itself would much rather have you treat them as lunch meat for your feet. Something you would never think to wear twice. And yet, this is Car Wars. You never played just one game. If anything, games like Car Wars and Battletech were more sports than games. There was always an element of “wait until next time!” as you wheel the wreckage of your latest creation back to the drawing board to make changes and tweak endlessly. 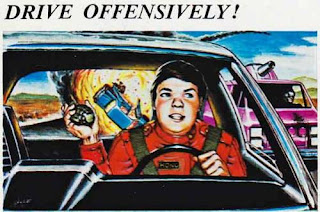 (better believe I'll be back)

So. 6th Edition is finally going to be a thing. It will probably be SJGames does Gaslands. After all, if it wasn’t for Gaslands pulling the rug out from under Car War’s former glory there would probably be no 6th edition. Will it be good? Will it suck? Well, it really can’t be any worse than Car Wars itself. The question is, will it still be Car Wars or will this be more like Twisted Metal the tabletop edition?

We’ll just have to check it out and see.
Posted by JD McDonnell at 11:51 AM