That is some damn dull art. Sadly, it almost seems to prove my suspicion that art in RPGs is like grammar. It is something that needs to be there to prove that someone cares about what we are reading. On the whole, after the initial purchase we stop noticing it. The art becomes a layout device to break up text walls and does not much else.

Since Halloween is almost upon us, I thought I might take a look at a game which I think does have good if not great art in it, and that is the original CHILL from Pacesetter which came out back when I was a kid circa '84.

CHILL has been and still is a spotty affair. It had great creative writing, crappy mechanics, and a slew of follow up editions that should never have been made. I'm sorry if that trods on any toes but Mayfair Chill looks like someone pulled it out of a dumpster dive and 3rd Edition, while doing much to improve the rules is just a strikingly dull affair. Sometimes it almost feels as if CHILL is a cursed property that no one can seem to do anything with. Or at least, nothing that improves over the original.

One of the reasons for this may have something to do with the excellent artwork of Jim Holloway. Most of it is done in stark black and white. It is not edgy. It is not extreme. It often looks like stills taken from a Hammer Horror film, but it is a whole lot of fun. This is what I mean about being sharp. A decent amount of thought was put into each of these images, probably well before pencil was ever put to paper. So let's take a look.... 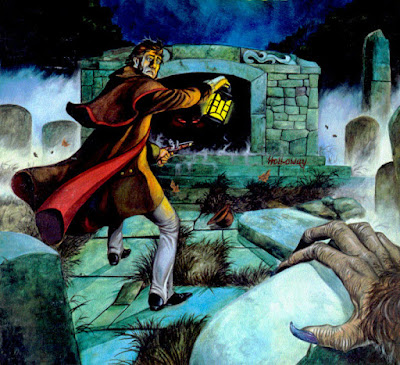 No snoozing around the campfire here. This guy is screwed! He is in a dark cemetery at night with at least two beasts to content with (probably werewolves, Pacesetter CHILL loves its werewolves). Oh yeah, and he has a single shot pistol. Is there a silver slug in that gun? Let's hope so.

Holloway loves to put a sense of direction and depth into his art. This one starts in the lower right corner of the foreground, shoots through it to the fearful expression on the guys face, and then goes beyond it to the red eyes he is blindly running towards. We are seeing this scene from the point of view of the creature which heightens the tension by implying that there is no guarantee mutton-chop man is going to survive the night. 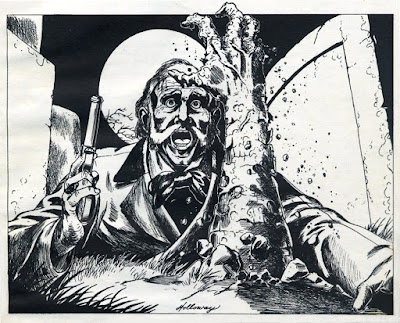 GyaAAAAAAAAH!!!!! It's hard not to jump a bit when seeing this classic pic. This is no character in armor standing around waiting for something to happen. This is a guy in a suit who has probably fallen while fleeing a cemetery and hit the ground in the worst of all possible places. That arm is shooting up out of the ground, implied by the small bits of dirt hanging in the air around it. Once again we get a great use of perspective with the head stones adding to its depth. Holloway loves to use the moon as a back light, allowing him to highlight a face while still using a perfectly black sky. 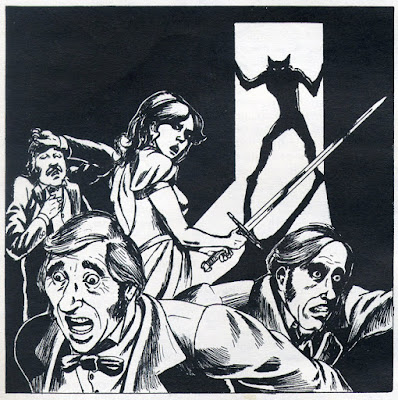 "You Cowards!" You can almost hear her shout as the men in the room faint and flee around her. Once again, Holloway isn't interested in an unexpressed face and neither are we. It's also interesting that he doesn't care much for drawing furniture. He can, it shows up in other pics, but if the room is dark then why bother with anything but darkness? You can pretty much guess that there is a werewolf standing in the doorway but because all we are given is a silhouette we don't know for sure and that adds to the tension of the scene. 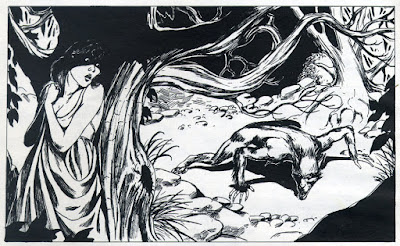 You never want to let the viewers eye fall on an image and go thud. This one has a great swoop of motion funneled through the big areas of black in its corners. The interest begins in the upper right hand corner, moves down over the werewolf, follows the creature's gaze in the direction of the girl moves up her dress, over her hands to her face and then follows the gnarled branch back onto the werewolf, or possibly off to somewhere else. Does he know she's there? Has she hidden herself well enough? Roll the dice...

Another great thing about this pic is its use of shadows. Hiding half of her head in darkness but showing us the whites of her eyes truly makes them pop. 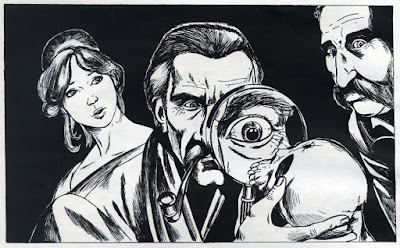 Speaking of popping eyes, this is another great pic which has nothing over the top happening in it. The PC's are examining a skull that has been shot in the head. That magnifying glass blows the guy's eye way out of proportion. It says to Look! Look here! Look closely! There is something important to be found.

An interesting observation. Sherlock isn't looking at the bullet wound in the skull, the most obvious point of interest. He's looking at something else about it, possibly its teeth. What it is we will never know. 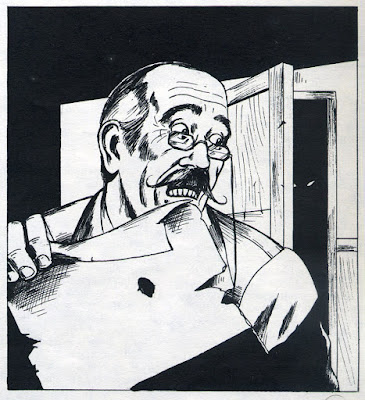 Be careful what you read in Chill. There is no telling what it might summon. In horror, you never want to show the entire creature. To know everything there is about a beast defines it, encapsulates it, limits it. Leaving it partially hidden erases its parameters. In the darkness there is no telling where its horror actually ends. But.... 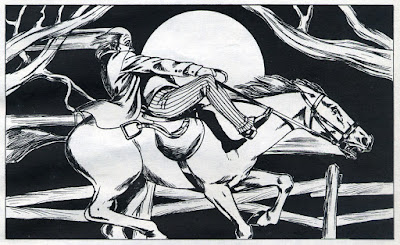 Want a great depiction of fear that doesn't involve chainsaws? Put Ben Franklin on a horse which is so spooked it is beyond control and running as fast as it can across the moonlit countryside. Ben is saying, "Whoa! Whoa! Nag Whoa!" but the horse knows better. It knows the headless horseman is charging up behind them, flaming jack-o-lantern in hand. 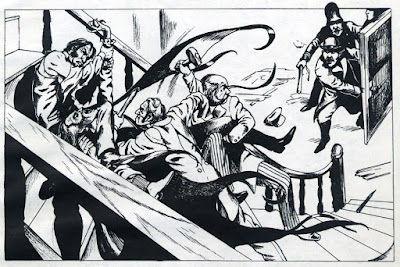 Once again, this is not just a picture of a thing. It is a happening. It's a big complicated messy misunderstanding just about to break. Isn't it great! So often adventurers get to run around doing whatever they want, but in CHILL the world still is as it is and for the police that five hundred year old vampire is just a kindly old, slightly eccentric, gentleman who is having his rights violated by a bunch of mutton-chop bearing hoodlums. 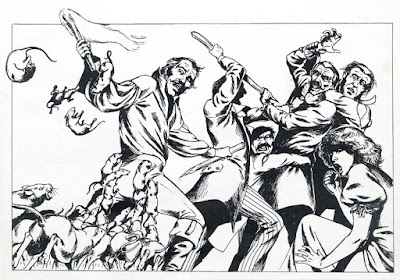 More fun with vampires. It's not enough to show us characters standing there. Everyone is doing something in this scene, even the vampire himself who we somehow know is summoning up the swarm of rats squeaking behind them. Another thing Holloway loves to do in his pictures is put a frame around the image and then break it (look for the torch and flying rat) to provide an extra sense of depth.

Is it me or does this one seem a lot like the raising of the flag at Iwo Jima? Either that or a deleted scene from The Breakfast Club. Speaking of eating.... 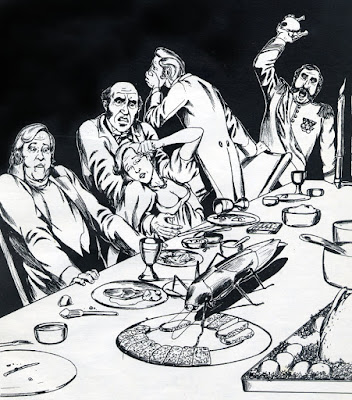 Even by Florida standards, that is one hell of a roach. I love the guy about to chuck a squab at it. When was the last time someone in one of your games chucked a squab at something?

Once again, the picture is not just about having something happening but also capturing everyone's reactions to the happening. It makes one wonder, if something is happening and the characters are not reacting to it then does it actually happen at all? 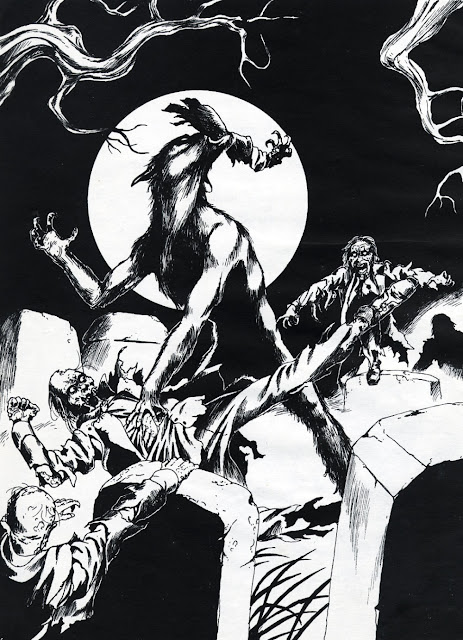 Probably one of the most bad-ass images in all of classic gaming, nothing says Chill quite like a werewolf battling zombies in a decrepit old graveyard full of gnarled trees and with a big bloated moon hanging on the horizon in the background.

It makes me wonder about what else might be going on behind the scenes of all these pics. Could it be that the guy who fell in the cemetery before the up-shooting hand is actually a werewolf? Is the werewolf a villain or a hero? The world will never know.

With all of these works, it is also good to pay some attention to what is not in them. There is worry, fear, rage, concern and disgust, but there are none of the truly negative aspects of horror. No one is being tortured. No one is reduced to tears and begging for their lives. This is fun horror. Terrible things happen but no one's soul is ever being crushed beneath the heel of the bad guys. If anything, this is fight or flight horror. It brings out the best in these characters, forcing them to do more than they ever thought they could. 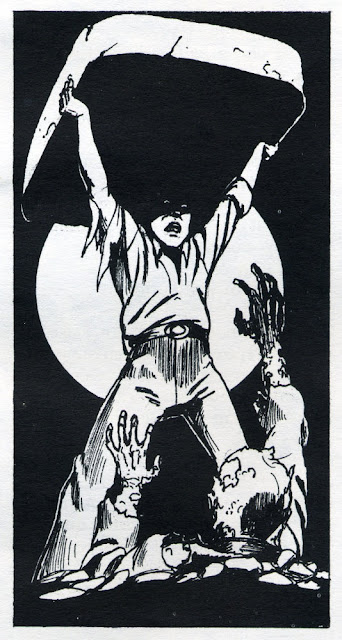 Ultimately, CHILL is an excuse to have characters run around screaming their heads off and occasionally hacking apart some ghoul with a shovel. Thanks Jim Holloway! There is just so much to love here. Happy Halloween! 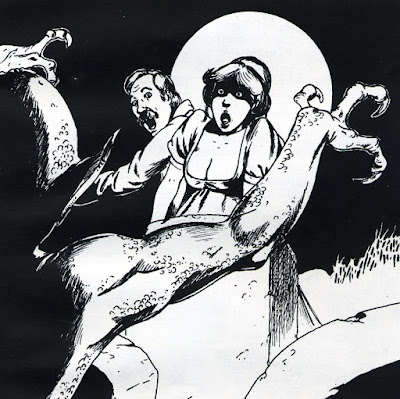