A Tale of Way Too Many Dice Mechanics, Pt 1 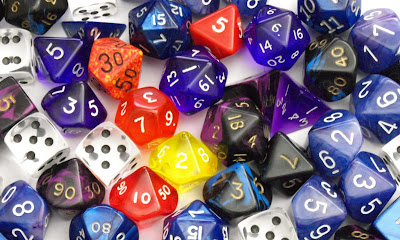 Normally I make New Years Resolutions and drop them by February just like everyone else. This year I’ve decided to do something different. I have made a resolution I want to finish before New Years instead of after it. By Jan 1st 2020 I will have finished the rules of the Agama, and released a working prototype of the game.

What is the Agama?

Funny you should ask…

The Agama is the latest and hopefully - last - incarnation of something I have been tinkering with since the day I came back from Gencon ‘93. I had just graduated college and spent most of the summer sending out job applications. Thanks to a recession I was also getting nothing in reply. Some old friends from high school had decided to go to Gencon. They said they thought about inviting me but knew I was also busy looking for work and probably wouldn't be interested. Then someone dropped out at the last minute, a seat in the car opened up and (possibly even more importantly) they needed another person to help split the hotel room bill. After chewing them out for not giving me any time to register for any events, I said what the hell. I needed a break and a road trip did qualify.

Despite going to Gencon and not playing a single game, it did prove to be  a fun trip. I wandered the convention hall. I made friends with a cute girl who was stuck waiting in the hall while her boyfriend played games. We went to the Milwaukee Museum of Modern Art and made fun of the exhibits.

(A bit like this but with less punk, less rock and more Milwaukee.)

I also looked at the state of gaming. DOOM had just recently exploded onto the scene and the wargamers among us were going nuts over first-person shooters. Meanwhile, the drama majors had abandoned the tabletop for LARPing and were going gaga over White Wolf games. What did D&D have? TSR was trying way too hard to build up scant interest in DragonStrike a VHS powered fantasy adventure game that people were stopping by the booth to laugh at, not with. There is a difference. 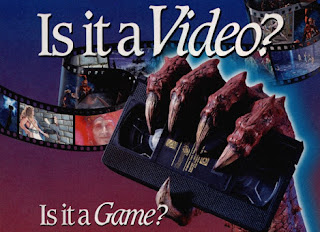 (Or is it a crime against humanity?)

TSR had finally and irrevocably lost touch with one the best things about the tabletop RPG and that is the ability of its players to imagine the game as they wanted to see it. With Dragonstrike it felt as if someone in the corporate board room had read the latest spreadsheet, looked at what they were producing and decided that D&D was suffering from a failure of imagination on the part of its players. Their problems had nothing to do with the game itself. THAC0 was a perfectly fine concept that anyone could grasp. It had to be the players not seeing things correctly.

Anyways. The weekend ended. We all returned home. I went to the bookshelf in my room, noticed how my gaming books had been collecting dust and had to wonder - why was it failing? - why was something which once held our rapt attention now just barely grabbing us?

The obvious answer was that times had changed. Computer games had grown too good. The internet was spreading across the world and blowing people’s minds with its infinite (albeit dial-up speed) possibilities. But that was nothing I could do anything about. I started to wonder about the game systems. AD&D in particular was a game we loved but almost hated to play because of how often the game would melt down over some dispute over the rules. I started to wonder what could be done differently. What could be changed to make things better. Because of my group’s many problems with the rules, house-rules had come to be abhorred, yet since we had also moved on to other things I figured no one would care if I dissected the games we loved and cobbled together something made from their best parts. The tabletop rpg was dead wasn't it? Nobody would be playing these things in a world with DOOM in it. Come on. Who are you kidding....

Without even knowing a word for it existed, my first game was a Frankensteiner based on Gamma World and set in our home town a few hundred years after the fact. It wasn’t bad. It almost even got played, but that’s a story for another time.

Although my game design failed, through it I caught the design bug. By the mid-90’s I had created a stand-alone system called Theater of the Absurd. It was essentially a way of playing Pacesetter CHILL but with better mechanics. Or at least, what I had hoped would be better mechanics, the name partially referred to just how weird and wonky everything turned out to be. This would later be shortened to the ToAd, because it was kind of ugly and covered in warts, but it could take you to amazing places if you dared lick it. What no takers? The ToAd was also more of a universal GURPS-like system that could be used with anything. Just as soon as I brought one of those anythings into existence. 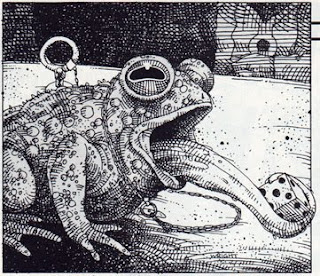 (Not our actual mascot but you get the idea)

Around 2000 the ToAd was re-invented yet again to become Tales of Adventure. I had learned website programming and for a while hosted a fairly popular website where you could create and store characters and equipment and pretty much everything including your own worlds. Suck it D&D Beyond! The ToAd was there first. Unfortunately the web technology of the day was a pretty crude affair and using the site proved to be far more work than it was worth. A few years later I demolished it and rebuilt both the game and the website from scratch to create the Model Reality Kit or MRK.

Then 2008 hit. Things got crazy and I pulled the plug on the MRK. I also came to the realization that trying to build a support website for a game that was still in development was like trying to frost a cake before baking it. The website idea was chucked and the next few games would all be on paper starting with an OSR inspired return to fantasy adventure called the Komodo. Because it’s a dragon. A real dragon. 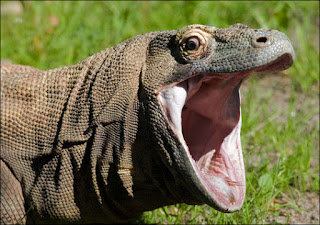 Well. It doesn’t matter. The Komodo morphed into the Komo Dosr and I simply didn’t like it. It wasn’t just a return to the games of the past but also a return of all their problems. I pushed it aside to work on something totally different, something light and fast called the Red EFT. It was fun but it was so outside of what I knew, I wasn't sure if I trusted it as the foundation I was looking for. I returned to the Komo Dosr, broke it down and rebuilt it from scratch to create the Agama. Which is where I’m at now. 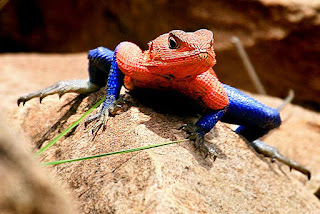 (Have you noticed a pattern yet? A borderline fetish?)

So what took so long?

Game design, I learned, is a lot like playing Jenga. It’s not enough to stack up a bird’s nest of rules. You also need to carefully remove as much from it as possible without knocking the whole thing over. To some degree it is harder than Jenga, because once you have reached that point of perfect lightness you need to start stacking books of stuff on top of it - representing the imaginary world itself - and hope that it all holds together. The perfect game system is like a geodesic dome. The concept is simple and it can be built using ordinary items, but by a trick of geometry the dome is also strong enough to withstand a hurricane.

I just could never get the foundation right. Every time I poured the concrete it would crack as I discovered something new that would work better or faster or more imaginatively. Eventually that innovation would push me to the point of ditching everything and starting over from scratch.

And here I am again. The Agama is mostly written. What is keeping it from being completed is an inability to decide on its die mechanic, that all-important kernel of any RPG system. Currently, I have too many choices and no desire to throw it away and start over from scratch. Like Danny Glover in the Lethal Weapon movies I’m getting too old for this shit.

So with this series I’ve decided to do an in-depth analysis of the primary contenders, pick one and try to be happy with it. Who knows, maybe by New Years the conundrum will be solved and I will have actually finished something. Which ironically is what most people would consider the starting line of game design. 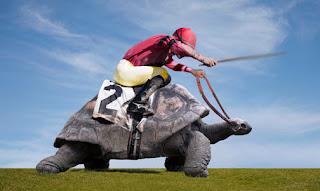 So consider this the start of a bunch of related blog posts looking back on my favorite die mechanics from the last few years. Not all of them, just the good ones.

What’s up next? First a look at the venerable d20 roll and whether or not it actually needs to be replaced. Stay tuned....
Posted by JD McDonnell at 5:49 AM